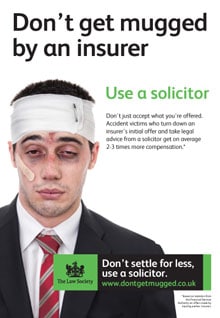 The Law Society yesterday unveiled its “bold” new advertising campaign to promote personal injury solicitors, with the strap-line ‘Don’t get mugged by an insurer – use a solicitor’.

As revealed by Legal Futures last week, the campaign is costing around £300,000 and is the first time the society’s annual advertising push is focused on a particular area of practice.

The society said the campaign “deliberately takes a bold, humorous and memorable approach to convey an important message”.

The key message of the campaign is to urge consumers to not just accept the first offer of compensation from insurers. Research from the Financial Services Authority following a freedom of information challenge “revealed personal injury claimants who turn down an insurer’s initial offer and take legal advice from a solicitor get on average three times more compensation”, according to Chancery Lane.

Chief executive Des Hudson said: “This campaign doesn’t pull any punches, but we need to make a clear message, see your solicitor, don’t accept the insurers’ first offer and don’t deal with claims management companies. Pursuing your claim with a solicitor will mean you will get what you are genuinely entitled to.”

The ‘Don’t Get Mugged’ campaign will feature posters on public transport and stations, PR coverage in regional media, radio advertising, online advertising and a video on YouTube, although this is not yet available.

The society is also offering A3 size posters and postcards to all firms, as well as a rotating banner advert for websites.

Nick Starling, director of general insurance at the Association of British Insurers, hit back by claiming that it is lawyers who are mugging the public. “Insurers are fully committed to paying fair compensation to genuine claimants as quickly as possible full stop,” he said.

“Yet with a compensation system riddled with high legal costs and ambulance-chasing lawyers fuelling the ‘have a go’ attitude to claiming compensation it is the legal community that are doing the mugging, not insurers. And it is the insurance-paying public that is paying the price through higher premiums as a result of excessive legal fees and frivolous and dishonest personal injury claims.

“The government agrees with us, which is why their recently introduced reforms to the personal injury compensation system will ensure that genuine claimants get fair compensation as quickly as possible at proportionate cost. A campaign to ensure our compensation system is fit for purpose would serve the public much more than one promoting solicitors.”