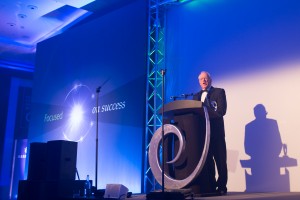 The Law Society made a one-off payment to its now retired chief executive Des Hudson under a ‘settlement agreement’ to offset a non-compete clause, it has emerged.

It comes on top of his appointment as chairman of Veyo, the joint venture between the Law Society and IT company Mastek that will launch an online conveyancing portal next spring.

The society is the majority partner but said Mr Hudson will not be paid for the role.

Mr Hudson also received the lifetime achievement award at the Law Society Excellence Awards earlier this month, as well as a farewell dinner.

He even has his portrait now hanging in the entrance hall of the Law Society on Chancery Lane, an honour usually reserved for past presidents.

The revelation about the payment came in papers for a recent meeting of the Law Society’s management board and its answers to questions posed by the scrutiny and performance review committee.

With no explanation of the context, the papers reported the committee asking for confirmation that “the amount to be paid to the chief executive pursuant to the settlement agreement or otherwise does not exceed his contractual entitlement”.

The committee then asked whether the society’s ruling council would be informed of the agreement. The management board said: “The outcome regarding the settlement agreement is for noting by council. Council delegated authority to management board to manage the process and decision.

“The agreement is a confidential document and as such is not shared with council. If council asked for information, the broad principles of the agreement may be shared.”

Aside from confirming that the exchange did refer to Mr Hudson – rather than the current interim or incoming chief executive – a Law Society spokesman refused to elaborate any further on these answers, saying: “The settlement agreement is a confidential legal document between both parties. We cannot disclose the content.”

Unlike all the other categories at the Law Society awards, there is no panel for the lifetime achievement prize; instead it is the personal choice of the president.

Awarding it, Andrew Caplen said that in his eight years at the helm, Mr Hudson “transformed how Chancery Lane works inside and out”.

He said: “Throughout, [Mr Hudson] has shown himself to be a shrewd negotiator and a powerful advocate for the profession. He has always sought to ensure that the voice of solicitors is heard loud and clear…. Most of all he is a man of great integrity. And one that cares passionately about the profession, the Law Society and the administration of justice.”

See End of an era