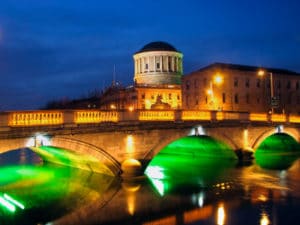 Dublin: no financial boost yet from new solicitors

Some 810 solicitors from England and Wales will have been admitted in Ireland by the end of 2016 to protect their status in a post-Brexit Europe, figures from Dublin have revealed.

The Law Society of Ireland (LSI) said there were few signs at the moment of any of them taking out practising certificates or their firms opening offices in the country.

It named 31 firms that have had four or more solicitors taking up the Irish qualification, led by Freshfields Bruckhaus Deringer with 117, Eversheds with 86, Slaughter & May with 40 and Hogan Lovells with 34.

The mutual-recognition regime in place between the two jurisdictions since 1991 makes it a straightforward process.

The 810 figure alone is more than the total number of new solicitors that the LSI has ever admitted in a year, and the overall figure of 1,347 newly qualified Irish solicitors this year is a 275% increase compared to 2015.

LSI director-general Ken Murphy described it as a “tsunami of new solicitors”.

He recounted a meeting at Freshfields in London where he was told that the solicitors taking out the additional qualification in Ireland were primarily anti-trust, competition and trade law practitioners based in its London and Brussels offices.

“They were doing it to allay any conceivable concerns in the future about the status of their solicitors in dealing with EU institutions, including in relation to legal privilege in EU investigations. They told us, unambiguously, that Freshfields had no plans to open an office in Ireland.”

Mr Murphy said: “Many hundreds of Irish-qualified solicitors have transferred to the roll in England and Wales over the 25-year period since [the mutual recognition was introduced], and have pursued very successful careers in the giant legal jurisdiction next door.

“It was a particularly appreciated outlet for Irish solicitors when their prospects in Ireland were bleak during the depths of the recent recession. Now the phenomenon of Brexit has changed the direction of transfers across the Irish Sea, from east to west.”

Mr Murphy said the LSI had not seen a financial boost from the mass influx, however, as the €300 per solicitor fee charged for admission to the roll simply covers the administration cost.

“Very few of the new solicitors to date have taken out practising certificates here. Perhaps this may change if a significant number of businesses, in the financial services sector for example, transfer some or all of their operations from Britain to Ireland as a result of Brexit. But at this stage, that can be no more than speculation.”

Last week, the Solicitors Regulation Authority spelt out to MPs the many risks of Brexit to the legal market – to clients, solicitors, law firms, foreign lawyers, the UK as a legal centre and the cause of liberalisation generally.