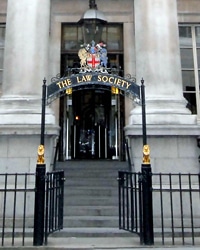 A special general meeting (SGM) on a motion of no confidence in the Law Society’s top officials’ handling of criminal legal aid negotiations with the government is to take place a month from now.

The meeting has been scheduled for 10.30am on 17 December at Chancery Lane, the earliest possible date for the meeting under the society’s constitution.

Responding to the SGM’s petitioners, a statement by the Law Society’s council called on the 166,000 members to support the leadership, arguing the society’s work “on behalf of all its members in every area of law would also be put at risk”.

The strongly-worded statement argued that negotiations with the Lord Chancellor over the second consultation on criminal reforms were at a sensitive stage. “We mustn’t give up now, given this key opportunity, before the Lord Chancellor reaches his final decision, to continue to advance crucial argument and reasoning,” it said.

The council reaffirmed its opposition to the proposed 15% cut in criminal legal fees, that a single fee should be paid regardless of defendants’ pleas, that there would be no escape fee for the most serious police station cases or that a single fixed fee should not reflect local conditions, and objected that fee cuts could “risk the livelihoods of committed criminal solicitors and jeopardise the quality of criminal defence”.

However, it argued that “engagement, evidence and persuasion are the only feasible route to achieving further changes” and reiterated its case that “outright opposition, however loud, however populist, may have temporarily raised the morale of this group of members but would have represented an abdication of the society’s duties to further the best interests of the profession and protect the public interest”.

If a motion of no confidence is passed at the SGM, the matter would go to a postal vote of the membership; in any case a postal ballot can be demanded by 20 members or 25% of those present at the SGM, whichever is the lower. The quorum for the meeting is 50 members.

The Law Society has called an extra meeting of the council to take place immediately after the SGM. Though this will mean that up to 100 council members will be present to vote at the SGM, a Chancery Lane spokesman insisted that this was not the motivation for arranging the meeting.

He said: “The constitution makes no such SGM motion binding, with or without a membership ballot. The responsibility for responding to the SGM, and for any decisions which are required, lies purely with council, the representative body of the society.

“The calling of an extra council meeting, to begin after the SGM, is to acknowledge the importance of the motion and its implications. It ensures that any proposed change to campaign tactics or decisions regarding the leadership of the society are taken at the earliest opportunity.”

The solicitor who instigated the meeting, Liverpool criminal practitioner James Parry, said the calling of the meeting was “to get bums on seats” from council members. Holding the SGM so early in the day, he added, was a deliberate ploy to make it “as difficult to get to as possible” for the motion’s supporters who lived many hours’ travel away from London. The cost of a return train ticket so close to Christmas was also a deterrent to hard-pressed practitioners.

He said that activity on social media since the time and date of the meeting were announced suggested that “other people have come to the same conclusion and are rather angry about it, which tends to bolster support rather than anything else”. He predicted that “we will have lots of support” on the day, and if it went to a postal ballot “commercial firms will support us as well”.

Mr Parry rejected the suggestion that he and his supporters were jeopardising the work the society did in other fields, a point also made by chief executive Des Hudson in recent video interviews. “That sounds like a man who is not very confident about his position. What I want him to do is to negotiate hard for criminal lawyers. I don’t think he’s done that,” he said.

In the formal statement by the members requisitioning the SGM, they said the government’s first consultation, Transforming Legal Aid, had united solicitors and barristers in opposition and there was evidence “their opposition was being increasingly supported by politicians of all colours and the media”.

“Their behaviour strengthened and encouraged a beleaguered Lord Chancellor to continue with proposals that will adversely affect the viability of every firm that practises criminal legal aid by reducing turnover of firms retaining duty work of 30% and for those losing duty work of 60% over the life of the contract taking account of inflation.”