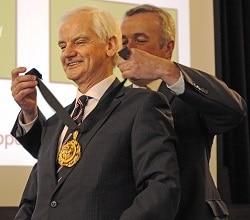 Joe Egan receives the badge of office from his predecessor as Law Society president, Robert Bourns

The Law Society has praised the government’s “decisive action” in introducing fixed costs in holiday sickness claims, and put the blame for fraudulent cases on claims management companies.

It has also launched consumer guidance warning that “some claims companies are actively encouraging people who have been on holidays abroad to make claims for sickness when no illness has occurred”.

The issue of holiday sickness claims – which has rapidly become a flashpoint between claimants and defendants – will be debated at our PI Futures conference [1] on 19 September in Liverpool, booking for which opened last week.

Issuing a statement a week after the Ministry of Justice announced its plan for fixed costs [2], new Law Society president Joe Egan said: “There has been a growing number of reports that some companies are actively encouraging people who have been on holidays abroad to make claims for sickness when no illness has occurred.

“We welcome the decisive action the government has taken on this issue. Fraudulent claims should be stamped on and claims companies who seek to profit from bogus or exaggerated claims must be brought to task.

“We do not oppose the principle of fixed costs for straightforward, low-value claims, such as holiday sickness claims. Fixed recoverable costs provide some certainty for both sides in litigation and avoid protracted disputes about the level of costs.”

However, Mr Egan warned minister not to penalise people with “genuine or more complex claims”. He added: “Also, fixed costs should not apply in certain circumstances – for example in complex, high-value claims where people have been seriously harmed, or where a large group of people have been made ill or harmed in the same incident.”

Mr Egan also urged insurers not to pay out on claims “which are either fraudulent or which lack legal merit”.

He used the opportunity to reaffirm the society’s support for a complete ban on cold calling for personal injury claims.

Meanwhile, the Association of British Travel Agents (ABTA) has urged the industry to maintain the momentum on its ‘Stop Sickness Scams’ campaign “to ensure that change is made as quickly as possible to close the loophole in legislation that allows claims companies to unduly profit from sickness claims”.

It called on the travel industry and its partners to respond to the government’s call for evidence, which is expected to be published soon.

“Over the last year, ABTA and its members have worked hard to present a body of evidence to the Ministry of Justice showing that whilst claims have increased by over 500%, there has been no corresponding rise in reported levels of sickness in resorts.

“The call for evidence will build on this work and seek to gather further data and views. ABTA will also continue to work with government to support long-term solutions to the problem, including further reforms to increase transparency in the relationship between claims firms and solicitors.”

ABTA has released two new videos [3] to highlight the risks of making a fraudulent sickness claim which it will promote on social media and using online advertising.