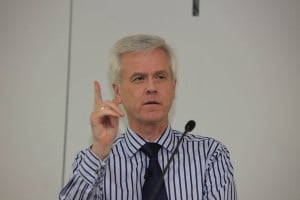 Mayson: lawyers will become a subset of the total number and type of legal services providers

The Legal Education and Training Review (LETR) should lead to alternative routes to qualification through a modularised and work-based approach, the Law Society has said.

However, it has warned against moving to an activity based form of authorisation to practise that downgrades the value of titles such as ‘solicitor’ and ‘barrister’.

It comes as leading legal commentator and academic Professor Stephen Mayson has expressed concern that the LETR is in danger of being subsumed by vested interests and failing to address the needs of the emerging legal market.

In its initial response to the LETR, the Law Society said the traditional route of qualifying law degree, legal practice course/Bar professional training course, followed by the training contract/pupillage “will continue to be a popular and effective way of enabling people to qualify as lawyers within a short time”.

“However, we strongly support the development of alternative routes which achieve the same standards and, particularly as the costs of education and training rise, enable people to gain qualification through a modularised and work-based approach. What is essential, however, is that the standards required are consistent whatever route to qualification is taken.”

While supporting a greater degree of common training for those entering the legal profession, the society defended the current system of providing a wide general knowledge of the law and practice, which is used as a basis for lawyers to specialise in individual areas. It said this recognises that there are no entirely discrete areas of law.

It continued: “In the society’s view, the qualification requirements for use of the title ‘solicitor’ or ‘barrister’ should be sufficient to ensure that an individual is qualified, to entry level and, subject to supervision and the rules governing competency, to undertake the full range of legal work permitted by their regulator.”

However, the response acknowledged that “there may well be strong arguments for there to be particular qualifications which recognise expertise that can be used under supervision, which could be used to count towards qualification as a solicitor”, while “there is also much to be said for further qualifications being available to demonstrate expertise”.

In a blog published yesterday, Professor Mayson said his initial optimism about the LETR has “gradually been draining away”. He explained: “The principle of a root-and-branch review sits rather uncomfortably with the pragmatics of funding it. The notion of ‘he who pays the piper’ cannot easily be pushed to the back of one’s mind.

“If the paymasters are incumbent regulators of professionals, the perception of an independent review in the wider public interest becomes harder to sustain (I’m talking about perception here, not reality).”

He argued that the starting point should not be how the current framework can be tweaked to meet the needs of the future. There is an overly ready assumption that the only issue that needs exploring is that of regulating the education and training of the legal profession, he said.

“But the Legal Services Act 2007 does not start with the assumption that legal services will only be delivered by those who are legally qualified and hold a professional title. It heralds a mix: the concurrent regulation of individuals, activities and entities…

“The assumption that competence and ethics can only be demonstrated by those who are legally qualified is arrogant and unjustifiable. Indeed, the falseness of this view is written into the very core of the [Legal Services] Act. Parliament has already decided that legal services do not need to be delivered only by those individuals who hold a protected title, but can be offered by those individuals who are authorised, or entities that are licensed, in relation to one or more of the reserved activities.

“To suggest that any such authorisation should only be founded on the same breadth of education and training as those who hold a professional title is to seek to achieve by the back door what Parliament has opened the front door to avoid.”

Professor Mayson predicted that lawyers will become a subset of the total number and type of providers. “The task for the LETR cannot be limited to how to adopt or adapt the route to professional qualification for broader purposes (and, to be fair, its terms of reference do not suggest that it is). The future will also have reserved activity specialists and non-lawyers engaged in the delivery of legal services, as well as in the ownership, financing, governance, compliance and management of the entities providing those and other services.

“To assume that their education and training needs can (or, worse still, should) somehow be carved out of a broader legal qualification process to me presents the greatest threat – and would perhaps even deliver the fatal blow – to the credibility of any proposals for the future…

“Until we disconnect the award and retention of a title from the quality and standards of competence and ethics required of those authorised to deliver a regulated activity, we are not even on the starting blocks of a proper debate about the future scope, reach and proportionality of regulation for legal education and training.”