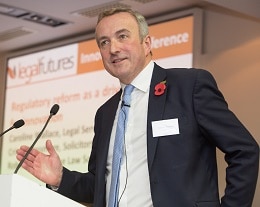 Bourns: no compelling evidence that reform will lower premiums

Research by the Solicitors Regulation Authority (SRA) to support its plans to reform indemnity insurance has “clear limitations”, ignoring the recent increase in claims related to cybercrime among other failures, the Law Society has claimed.

Gearing up for the next round of its battle with the SRA over insurance reform, it said there was “no compelling evidence” that changes would reduce premiums, but said it would have on impact on client protection.

Yesterday, the society published a response to the SRA research, which the regulator put out last October [1] to inform the development of proposals to changes the minimum cover requirements.

This followed a previous bid to amend the rules – and cut the minimum level of cover from £2m to £500,000 – which was rejected by the Legal Services Board [2], which wanted more information first.

The Law Society noted that although the report covered 90% of insurers currently involved in the market, it did not include claims data from those that had left, such as Quinn, Lemma, Balva, ERIC and Enterprise.

The society described this omission as “not insignificant”, given that Quinn alone was insuring 30% of all law firms before its collapse in 2010.

On cybercrime, the society said the impact had “not yet been fully evaluated” and the SRA’s data, which covered the period 2004 to 2014, did not include the recent increase in claims, “some of which have exceeded £1m in value”.

Further, the Law Society said the data did not provide statistics on the value of the 2% of claims that would not be covered if the SRA cut the limit for cover to £580,000.

Applying its own analysis, the society estimated that “on a conservative basis”, reducing the minimum cover in this way would leave around £157m of payments outstanding, or 8% by value.

The society warned that the effect on a law firm and its partners in the remaining cases where the claim was not fully met by insurance could be “catastrophic” and “easily lead to firm insolvency”.

It went on: “All indications are that reducing the minimum level of cover to, say, £500,000, would have little effect on premiums, including for small firms for whom the SRA appears particularly keen to reduce regulatory costs.”

Given that there had been “no change” to the indemnity regime since 2014, the society said there was “no reason to believe” insurers’ views had changed.

“Anecdotally, the society’s recent conversations with a number of insurers and brokers support this assertion.”

The society concluded that reducing the minimum level of cover would be “misguided”, increasing the risk exposure of firms and clients to “unnecessary and avoidable levels”, creating an “uncertain and potentially more costly” market for top-up cover and allowing trust in the legal system to be “eroded by unmet claims”.

Robert Bourns, president of the Law Society, added: “We find no compelling evidence to suggest that reforms would provide a significant reduction in the cost of professional indemnity insurance to firms, and therefore reduce the cost of legal services for consumers.

“Reducing the minimum level would leave both clients and firms exposed to risks. The knock-on effects we wish to avoid in particular are instability and reduced trust in a legal services sector that is currently one of the strongest and most vibrant in the world.

“If the SRA is to consider reforms it should, in line with best regulatory practice, undertake a thorough cost-benefit analysis and impact assessment as to how these will affect the market, the profession, equality and diversity, and the clients who rely on firms to protect them.”