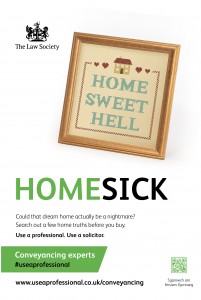 The Law Society’s latest advertising campaign, launched today, highlights the role of solicitors as regulated professionals, under the slogan ‘Use a Professional. Use a Solicitor.’

The advertisements are more restrained than last year’s personal injury campaign, which included the slogan: “Don’t get mugged by an insurer – use a solicitor.”

The society described the new adverts as “humorous and attention-grabbing”, and said they “quickly convey the value of using a solicitor and how to find one”.

President Andrew Caplen said: “The growth of unregulated and do-it-yourself legal services means consumers are exposed to non-professional advice, which can be more of a hindrance than a help.”

“The campaign reinforces solicitors as the go-to experts when people are seeking legal advice on house purchases, will writing or establishing a new business, and directs people to the Find a Solicitor service on the Law Society website.”

The campaign, which will run until early next year, also covers personal injury work, family law and criminal law. Advertisements will appear at train stations and on buses, as well as online through sites such as ITV Player.

Legal Futures revealed in June that the campaign would cost around £400,000 and be managed by Yorkshire-based PR and marketing specialists DTW. 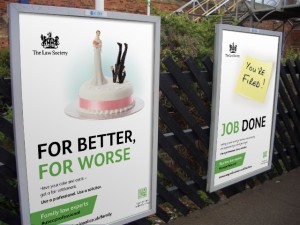 The society membership board was told that it aimed to “sensitise members of the public, including SMEs” to the needs which could be served by solicitors and improve members’ confidence that the society was meeting their needs, especially in generating new business.

Solicitors can order an ‘e-pack’, allowing them to customise campaign posters and advertisements with their logo and contact details.

Meanwhile, the Law Society has released details of the interim chief executive who will run Chancery Lane for a four-month period before the arrival of Des Hudson’s permanent replacement, Catherine Dixon, in January.

Paul Coen is chairman of the Ashridge Business School, and was previously a managing director of Citigroup. He has been chief executive of the Local Government Association, and of both Surrey and Essex county councils.

Mr Hudson retired at the end of August. Ms Dixon is currently chief executive of the NHS Litigation Authority.