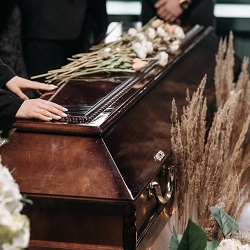 Funerals: Some law firms advise on, arrange and sell plans

Law firms selling funeral plans as intermediaries may need to be regulated by the Financial Conduct Authority (FCA), the Solicitors Regulation Authority (SRA) has warned.

The SRA said it was considering whether firms should be regulated by the FCA following the introduction of a new regulatory regime for funeral plans this summer or whether to regulate them itself.

Welcoming the arrival of regulation in a discussion paper, the SRA said: “At a time of increasing living costs, and the continued impact of the pandemic, we expect vulnerable consumers to be increasingly looking at protecting their families through considering a funeral plan policy.

“At the same time, we have recently seen a high-profile case where a funeral plan provider has collapsed, leaving consumers with limited or no financial protection, despite paying into the policy.”

Although it had not seen “any evidence of consumer detriment caused by SRA-authorised firms providing services in this area”, the regulator said it needed to understand the market in greater detail.

“Our own initial research shows that some SRA-authorised firms advise on, arrange and sell pre-paid funeral plans either as part of a package or standalone activity.”

However, it could not “precisely estimate” the scale of funeral plan activities, making it difficult to assess the impact of its alternative approaches.

The SRA said law firms could not sell funeral plans as providers, because this was specifically banned by section 327(6) of the Financial Services and Markets Act 2000, but they could act as intermediaries.

Once regulation of intermediaries was introduced, they could be regulated by the FCA or by the SRA as a designated professional body under the Act.

The FCA said it was concerned about plans that “do not guarantee a funeral service” and “high-pressure sales tactics” used by some intermediaries, including cold-calling potentially vulnerable consumers.

There are also concerns about high rates of commission and fees, plans not being claimed because the consumers’ families do not know about them, and poor financial management of trusts, with “unclear and potentially poor outcomes for consumers if firms fail”.

Under the regime being introduced on 29 July this year, activities relating to funeral plans will become regulated.

Firms selling funeral plans, either as providers or intermediaries, will have to provide consumers with the “necessary information to make clear and well-informed decisions”.

Intermediaries will be barred from holding money paid by consumers and commissions for arranging funeral plans will be banned.

The SRA said it was interested in what the FCA’s decision to ban commission payments would mean for law firms and invited them to “share insight into the extent to which firms receive commission for pre-paid funeral plans, and whether this ban will mean that firms choose to exit the market”.

The SRA added that it was discussing “the potential for transitional arrangements” with the FCA and its position would not be finalised until after 29 July.

Having established its policy position, a formal consultation would follow, which it expected to conclude in late summer, with proposed changes approved by FCA and Legal Services Board in the autumn.

Tracy Vegro, the SRA’s executive director for strategy and innovation, said: “Solicitors provide these services for clients often at stressful times. Pre-paid funeral plans can help reduce some of the stress on families following the death of a loved one through planning ahead and potentially easing costs.

“However there have been times when these plans have not delivered what consumers expected, causing additional upset to bereaved families. We welcome the FCA’s plans to strengthen consumer protection.”