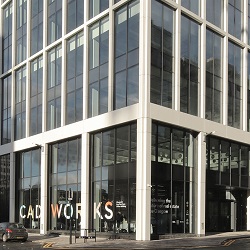 Cadworks: Blueprint for other TLT offices

National law firm TLT is moving next month to what could be the most environmentally friendly solicitors’ office in the UK.

The building has no parking spaces, though it does have charging points for electric cars. There are racks for 150 bicycles, e-scooters for clerks to deliver documents, ‘air-purifying’ paint and lifts which generate electricity when braking.

John Paul Sheridan, head of TLT in Scotland, said the top floor of the Cadworks building, the first net-zero building in Glasgow, was “not cheap” but would save the firm money in energy and maintenance charges.

He said sustainability was “very important” for a law firm that specialised in services to the renewable energy sector, and for its staff and clients.

Cadworks is built only with recycled timber and 80% of its steel is recycled, half of its concrete and over 40% of its glass. Its lighting is LED throughout, and it is a ‘smart’ building in using sensors to detect whether rooms are being used.

Mr Sheridan said TLT would occupy the top floor of the nine-storey building when it moves in next month; it is the first business to lease space there.

He said Glasgow would be the ‘concept office’ on which redesigns of the firm’s six other offices in the UK would be based.

“It is an office designed to encourage people to come in and do the things they can’t do at home.

“We decided last summer that we would be fully flexible regarding our working environment, with no central diktat specifying how many hours staff should be in the office.

“It’s up to the teams. Some people will very rarely be in the office. Others will be there all the time. There’s no hard and fast rule.”

The new office has hot desks with no desk-based phones, and large communal areas for team working. A fifth of the desks are for standing rather than sitting and there are “quiet focus pods” with sofas surrounded by sound barriers.

Mr Sheridan said there were also rooms specially designed for court hearings, with screens and microphones, because “a lot of hearings will continue to be online”.

Cyclists enter the building by using a ramp that leads down to the basement, and a gym-style area where they can cool down or warm up, and which has showers and changing rooms.

Mr Sheridan predicted that the proportion of staff cycling to the office would increase and he would be joining them.

It is the first building in Scotland to use Airlite, a 100% natural technology that is anti-viral, anti-pollution, anti-bacterial and self-cleaning; its protective oxidant barrier decomposes harmful organic and inorganic substances.

It also reduces a building’s solar heat absorption, saving on the cost of air conditioning and lowering C02 emissions.

He added that the new office would appeal particularly to younger staff, who expected many of its features to be there. “They want to be in a place that speaks their values.”

FORE Partnership, a purpose-driven real estate investment firm, has developed Cadworks; FORE’s stated mission is to accelerate the transition to a low-carbon economy and to do so in a just way by supporting local communities.

TLT announced a partnership with sustainability and climate change advisers Carbon Intelligence last year to develop its sustainability programme, part of which is the move to Cadworks.