Law firms “need to disrupt legal market before others do” 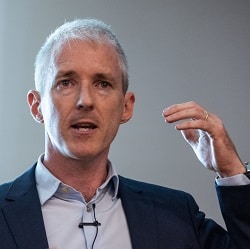 Beauchamp: We’ve decided to be our own disruptor

Law firms need to build “enlightened” partnerships so as to disrupt the legal market themselves, or face others moving in to do it, the chief customer officer at Slater & Gordon has argued.

Martyn Beauchamp was speaking in the wake of the consumer law firm supporting LegalDefence, an app that offers users the full range of consumer legal advice and support for £24 a month.

It is currently being piloted in Plymouth ahead of a roll-out early next year.

Mr Beauchamp insisted that the legal sector was not “delivering enough for customers” – legal services could difficult to access, expensive, complex and opaque.

“There isn’t always enough empathy and the information provided is too little, too late or poorly explained. We know this.

“It’s absurd for us to think that our industry is somehow different and that customers will not apply to legal services the same high expectations they have in every other area of their daily lives.

“The industry is packed with talented people who are dedicated to delivering good outcomes for customers. But it’s simply not working.”

He said this was why, of the more than half of UK adults who faced a legal problem in the last three years, two in three did not seek professional advice.

“So rather than repeating the same thing over and over again and expecting different outcomes, here at Slater & Gordon we’ve decided to be our own disruptor.

“That means looking to other industries for inspiration and forging progressive partnerships with like-minded organisations who bring capabilities we don’t have.”

He argued that LegalDefence would help widen access to justice, improve ease and convenience and ultimately deliver a better service.

The subscription model worked in other areas – with the likes of Amazon Prime disrupting retail, Spotify transforming music and Netflix the entertainment market – and “we plan to do the same in legal services”.

Mr Beauchamp explained: “It’s part of our broader belief that the future of legal services will mean building enlightened, disruptive partnerships with providers who bring competitive advantages that legal firms will never have.

“That means being humble enough to admit we can’t be good at everything, creative enough to build a winning eco-system and consistently delivering expertise that partners find compelling.”

He concluded: “It doesn’t matter which industry we’re part of: if we aren’t prepared to help customers by being our own disruptor, someone else will do it for us.”