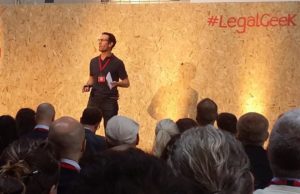 Law firms need to radically change their cultures to embrace emerging technologies such as cognitive computing – including suppressing their tendency to be risk averse – according to the head of strategy at a leading London practice.

Speaking in a session on artificial intelligence at yesterday’s Legal Geek lawtech start-up conference in London, Nick West, chief strategy officer of alternative business structure Mishcon de Reya and visiting professor at the University of Law, said embracing a “culture of experimentation” was vital if lawyers were to share the benefits of technology with their clients.

He criticised the mindset of many law firms as backward when it came to technology: “The average law firm employee is just not that tech savvy… Law firm business processes are archaic compared to the rest of the world… [and they are slow to adopt] technology that is widely accepted in the rest of the market.” He observed: “It’s astonishing”.

He said many law firms, fearful of regulatory compliance and ensuring client confidentiality, had invested in technology characterised by “closed systems and a massive over-customisation of made-for-legal software – that is the norm”.

Mr West – who trained as a solicitor at Linklaters and before joining Mishcons was the London managing director of innovative legal business Axiom – identified four reasons why law firms were slow to adopt technology despite it being in their best interests.

First, “lawyers’ training tends to make them risk averse – lawyers tend to see the dangers of technology before they see the gains”.

Second, “it is not in lawyers’ DNA to experiment” and law firms often do not invest in research and development like other businesses. Third, lawyers “have a pretty poor grip of finance and economics” and are often unable to “figure out a way to share the economic benefits” of technology with clients.

Fourth, “legal training is just so unfit for purpose” because technology is not taught either before lawyers arrive at law firms or within firms: “Law firm training tends to perpetuate the idea that law is an artisanal industry where the only tool is the human brain. That’s the way that we train people to think.”

Mr West described the above as “pretty strong forces that we have to work against”. Firms that wanted to “build a culture where technology will thrive” would have to proceed carefully because “we are talking about deep-rooted behaviours”.

The recipe for success in law firms was that the mandate for change had to be clear from the top down. He said that at Mishcons there was a 10-year vision and “at the front and centre of this vision is that the firm will be technologically transformed”.

It was important to choose language that would impress on lawyers that the technology would free them from the drudge elements of their work and enable them to be “more strategic”.

Explaining that a willingness to fail was a necessary part of research and development was also essential, he said: “It’s about setting the expectations of people – the path is not straight and we are going to do things that won’t work, but that’s okay; we’ll learn something along the way.”

Also, since law firms were fundamentally professional services businesses where client service was paramount, it was vital to link technology with positive outcomes for clients: “Cognitive technology allows us to do tasks better, faster, cheaper. We have to try to get people to understand that we are talking about benefits to our clients.”

Mr West concluded by saying that it was key to have staff that “really understand the strength and weaknesses of the nascent technologies”. They were crucial if the law firm was to “partner with the technology firms”.

Also at the conference, Legal Geek founder Jimmy Vestbirk revealed the community would launch an ‘incubator’ for lawtech startups in the new year. Applications for desks at the incubator can be made here.

The conference was sponsored by the Law Society, Thomson Reuters and magic circle law firm Freshfields