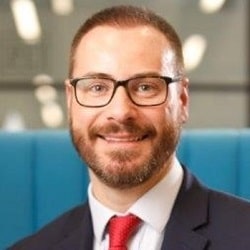 Foat: We want to partner with firms with the same ethos

Law firms and in-house legal departments have done “tremendous work” in improving their approach to diversity and inclusion and should now aim for “cultural equality”, a leading GC has said.

Ben Foat, group general counsel of the Post Office, said the presence of LGBT networks were a sign of cultural equality which he looked for when appointing law firms to his panel.

Mr Foat, who is gay, told Legal Futures: “The legal profession has made a lot of progress, but there is still a lot to do.

“We need to discuss cultural equality. We need to make sure that everyone not only has the right to participate, but to succeed.”

He grew up and qualified as a solicitor in Australia before moving to London and working for Kennedys in the City and then for Zurich Insurance.

He set up Zurich’s first LGBT network in the UK before and creating a network for the Post Office, called Prism.

“I know one person who isn’t ‘out’ and I think the visibility of Prism and having an openly gay GC communicates to that person that it is OK to be themselves at the Post Office.

“My attributes of coming from a minority group have helped me in my career. I’m far more resilient and driven than I would have been otherwise, with a greater ability to overcome adversity. I have not seen it as a barrier.”

Mr Foat said he had “made sure” that diversity and inclusion were among the criteria used by the Post Office in selecting law firms for its panel.

“We want to make sure we are partnering with firms with the same ethos. Law firms make better decisions with diversity of thought. It is rational to have a workforce that is diverse so that people can genuinely be themselves.”

Mr Foat said among the features he would be looking for in a law firm were “whether they enabled inclusion, culturally and strategically”, for example by having a diversity network or through training on unconscious bias.

He said a number of law firms had done “tremendous work” on diversity, such as Pinsent Masons, which regularly features at the top of the Stonewall equality index for law firms as well as being on the Post Office panel.

Mr Foat said 52% of the members of his legal department were female and 22% from BAME backgrounds, but it was important to go beyond the data.

He said statements made by law firms about diversity and equality in the wake of Black Lives Matter were important “because in the absence of that you have silence, which enables the status quo to go on unquestioned”.

However, advocacy alone was insufficient and it must be part of the strategy and business plan.

He said recent high-profile prosecutions lawyers by the Solicitors Regulation Authority for sexual misconduct “underscore the importance of why we need to keep diversity and inclusion on the agenda” and reinforced understanding of what was unacceptable.

“If people feel more comfortable they will call out unacceptable behaviour when they see it.”

Mr Foat said the pandemic had “proved the case” that people could work remotely.

“The old model of going into the office 9-5 has left us. It is about working out the best model for teams to thrive. The answer is probably a hybrid approach. Creative practices and ideas often come through face-to-face interaction.”

Work/life balance has “never been great” in the legal profession and working from home “had not helped”.

In response, he has focused on wellbeing, holding morning and afternoon sessions with his team online “almost every other day” at the start of the lockdown.

Mr Foat said this was another area where networks could offer employees “fantastic support”.