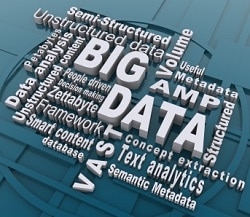 Law firms big and small are increasingly viewing artificial intelligence (AI) software and particularly the exploitation of data as integral to business health, a survey has found.

Predictably, it found that a majority of all firms saw the benefits of AI in terms of automation “to streamline their less technical operational areas”.

However, they also saw the benefits of data for their operations, with a marked increase in the number of firms that believed AI would enable them to offer new services to clients.

The survey concluded: “A flow of higher quality operational data will help firms to focus on developing their core business, while also remaining competitive and financially stable.

“Although AI may be seen as a playground for the bigger firms… smaller businesses that can understand the potential now, will position themselves favourably in the market going forward.”

On the challenge from non-lawyer firms, the survey said City firms viewed the threat as having increased moderately since similar findings last year.

However, it said law firms were confident they were up to the challenge: “Given that the threat of ‘supermarket law firms’ didn’t really materialise to the extent that many feared, perhaps firms are feeling more able to compete against new business models.”

It added the observation that “we are seeing an increasing appetite for other professional firms to dip their toes in the water”.

In other findings, the survey found law firms were prospering despite concerns about the marketplace.

“Despite the uncertainties around Brexit, the regulatory environment and the economy in general, the majority of law firms surprised us all, themselves included, by demonstrating revenue growth with the majority of those firms also enjoying improved profits.”

There was a drop by almost a fifth in the number of firms reporting a fall in revenues compared with last year.

Two-thirds of firms saw profit per partner increase, two-thirds of them by over 10%, most of them regional firms.

Louis Baker, Crowe’s head of professional practices, concluded: “Understandably, uncertainty remains the key word in the industry this year. Given the protracted Brexit negotiations, this is not unsurprising…

“This uncertainty appears to have encouraged most firms to focus on what they do best. The majority of participants are basing future growth expectations on expanding their existing market, rather than diversifying into new types of work.

“Despite all of this, most firms have shown themselves to be in good financial health.”