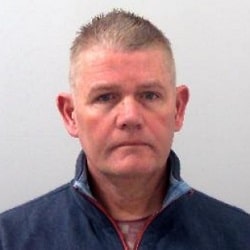 The former head of business development at a leading defendant law firm has been jailed for four years after a police raid discovered 6,000 indecent images of children on his computer and other devices.

Plexus Law said it only discovered last week that Laurence Ives, 55, had been charged and pleaded guilty, and fired him immediately.

Ives, of Leigh in Lancashire, was arrested in January 2018 after his house was searched. Almost 1,500 of the images discovered were in the most explicit category, and there was also evidence that he had been engaging in sexual chat with children, as far back as 2010.

According to local newspaper reports of last week’s sentencing, nearly 60,000 messages were found.

He appeared at Basildon Crown Court last week, having pleaded guilty to all offences, and was sentenced to four years in prison, placed on the sex offenders register for 10 years and made subject to a sexual harm prevention order for 10 years.

Detective Constable Nick Riley, who led the investigation said: “Laurence Ives was a predator who used social media to engage in sexual chat online with children as young as 12 years old.

“He prayed on young vulnerable people, grooming them online for his own sexual gratification.

“The horrible actions of this individual, sadly went undetected for 10 years, but his criminal activity was identified as part of an investigation into another individual and through this we were able to arrest Ives within 24 hours.

“Thanks to the hard work of my team, we were able to bring this offender to justice and ensure he cannot cause any further harm.”

Ives joined Plexus in 2013, having previously worked for Hill Dickinson as strategic and development director as well as various well-known names in the insurance industry.

In a statement, Plexus said: “On 15 July, we were informed for the first time that Laurence Ives had been charged and pleaded guilty to a number of charges against him relating to serious criminal offences. Upon learning of this matter, he was dismissed with immediate effect.

“The nature of these crimes is abhorrent, and our thoughts are with anyone who has suffered or been affected by such offences. Whilst the firm has not been approached by the statutory authorities, we unreservedly offer any support they may require.

“His crimes are in no way related to the firm or his work here. He was not a solicitor and did not handle any work undertaken on our clients’ behalf. We have nevertheless reported the matter to the SRA.”

The press reports said that mitigation for Ives said before the offending came to light, he was of “positive good character” citing multiple references from friends and colleagues.

Plexus stressed that none of those references came from the firm or any of its members.