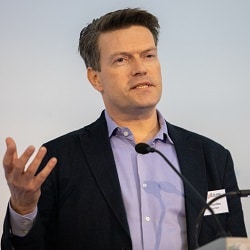 Two London solicitors expert in technology law agreed that artificial intelligence (AI) software, while effective at work done by paralegals, had no current role in replacing lawyers in terms of decision making.

One suggested that when it finally arrived, disruption of the legal marketplace might come from non-traditional sources such as Google or Amazon.

Alex Hamilton, chief executive and co-founder of Radiant Law, said that while “incentives” remained unchanged, law firms would absorb certain kinds of technology but deliver legal services according to timesheets.

“You can’t really introduce lots of disruptive stuff because why would you get rid of the billable hour?”

Mr Hamilton said that, between 2014 and 2017, law firms went “backwards in every dimension” after initially believing that clients were “serious” about demanding lower fees as a dividend from the adoption of technology.

“And then they realised clients weren’t really serious and actually would be fobbed off by press releases about innovation… ‘We don’t have to actually do anything, we just have to say we bought [an AI software] licence’.”

He said that while AI was good at doing lower-level work of, for instance, identifying relevant parts of contracts, it was “nowhere close to interpreting or understanding this clause”.

In the same way that deep learning chess programs were effective with humans working alongside, he explained: “Once you get your incentives sorted out [in legal practice] and you’re able to do something interesting, the question is going to be about how you use the machine and run with it.”

Taking a somewhat more upbeat approach to the potential of AI, Joanne Frears, leader in IP/technology law at Lionshead Law, said that while initial expectations raised of its use in the law had not been met, since then “many lawyers have realised that AI has valuable uses and are thinking what AI can do for them”.

She advised lawyers to look at other industries for ideas about how best to employ the technology.

She also recommended firms “consider what you actually want your AI for and that will help to frame your discussion”.

Ms Frears added: “Don’t think that AI is going to solve all your problems, because it really can’t make all the decisions for you yet. But if you start looking more broadly and outside of the legal context then you will see there are some really exciting things going on…

“It’s not just about reading contracts and you need to get out there and have interesting conversations with interesting software companies.”

She said disruption to the legal services market would not ultimately come from traditional suppliers, however: “Your greatest threat comes from Google or Amazon, from people who don’t have to be regulated. We really need to be cognisant of that.”

Disruption would only come “when lawyers wake up and decide to run their practices differently”.

Mr Hamilton suggested that law firms should consider investing in AI technology “maybe in 10 years” and meanwhile should instead look at making repeatable processes as efficient as possible.