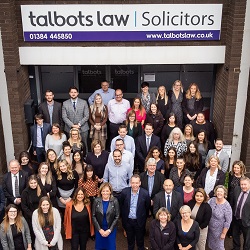 The latest law firm to embrace employee ownership, West Midlands firm Talbots Law, is looking to buy other firms as part of its ambitious expansion plans.

Dave Hodgetts, an accountant who became the firm’s chief executive this summer, said the move to employee ownership and the growth agenda were crucial in attracting him to the firm.

Mr Hodgetts, formerly head of commercial at energy supplier E.ON and before that head of finance and IT at Taylor Wimpey, said he was aware before he joined of the creation of an employee ownership trust (EOT), which was a “big selling point”.

Mr Hodgetts said that, as of yesterday, the EOT owns 55% of the shares in Talbots Law, and that every year a minimum of 20% of the firm’s net profit will be divided among its 274 staff.

“That figure is a minimum. It depends on our results and it could be considerably greater. If we’re super-successful, it could be a lot more.”

Mr Hodgetts said Talbots would be opening a new office in early 2022 in the Birmingham area, which he regarded as “stage one and the first of many”. It currently has seven offices across the West Midlands, Staffordshire and Worcestershire.

After that the firm would expand, both through organic growth and acquisitions, as part of its bid to increase its annual income from £17m to £25m over the next five years. The firm increased its income by 26% during the pandemic.

The shares were sold to the EOT by former chief executive and main shareholder Mary Morgan, who was married to the firm’s founder Martyn Morgan. Mr Morgan died in 2015.

Ms Morgan, who remains a director, commented: “Employee-owned businesses perform better, are more innovative and more profitable and have the security of being owned in a trust, so not subject to being sold or taken over.

“It was the only decision I could make when looking to sell a significant number of my shares and, most importantly, is excellent for long-term planning and vision.

“It will be business as usual for our thousands of clients and they will continue to receive the excellent level of support, service and legal advice they are accustomed to.”

Mr Hodgetts will be joined on the board by the four directors of the EOT − operations manager Zoe Fullwood, head of compliance Peter Hill, Ben Morgan, son of Mr Morgan, and Lynn Leighton-Johnstone, a longstanding advisor to the firm.

Last October, the founders of Tapestry, a law firm in Sheffield and Leeds which advises on employee share ownership and executive pay, also transferred all of their shares into an EOT [3], and earlier this year Crossland Employment Solicitors followed suit [4].

Oxford firm Hedges Law became the latest to embrace employee ownership in May, with the firm’s managing director Nicola Poole saying she was inspired to act [5] by how staff rallied during Covid.

Deb Oxley, chief executive of the Employee Ownership Association, said the transition to employee ownership would secure “the ethos, values and culture” of Talbots Law for the longer term.

“Firms that empower employees by giving them a stake and ‘a say’ offer great benefits and impact for the individuals and the company, which is also felt by clients and the communities it serves.”

Tapestry co-founder Janet Cooper will be speaking about the firm’s conversion to employee ownership at the Legal Futures Innovation Conference [6] on 16 November.