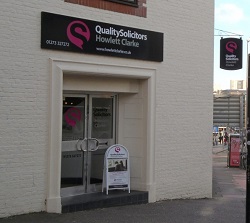 A Brighton law firm discriminated against its blind former managing partner on the grounds of disability, an employment tribunal has found.

However, the majority of claims made by Philip Schaverien – of direct discrimination, harassment and victimisation – were rejected.

A claim that QualitySolicitors Howlett Clarke constructively dismissed him was also rejected in a majority decision.

The tribunal heard that Mr Schaverien was the firm’s managing partner from 1996 to 2008. He continued as an equity partner until 2010, after which he was employed as a consultant.

He fell out with the current managing partner, Jackie Gillespie, after his daughter was turned down for a training contract.

Employment judge Andrews said: “Ms Gillespie and the claimant have known each other for a long time. It was the claimant who offered Ms Gillespie work experience in 1998 which led to her becoming a legal secretary and then a trainee solicitor.

“Until March 2016, it is clear that they enjoyed a close and friendly relationship; their families were also friends. The claimant’s daughter had worked for the [firm] on a temporary basis for many years starting when she was at school.”

Mr Schaverien argued that “he put his disappointment on this issue behind him and it was irrelevant when later events took place and was not part of the reason why he subsequently resigned”.

However, Judge Andrews said: “We find that this issue did lead to a serious deterioration in the relationship between the claimant and Ms Gillespie, his loss of confidence in the [firm] generally and his withdrawal of support for her on a daily basis, all of which at least to some extent influenced his reaction to later events.”

Judge Andrews said that, given the claimant’s visual impairment, adjustments were made to his ways of working and software provided for him and his part-time secretary/assistant to enable him to read documents. He had also had a part-time reader he paid for himself.

“It is clear that the claimant is an extremely experienced and very well-regarded litigator and mediator. It is also apparent that, notwithstanding his disability, he was and is able to work to the highest standards as long as the necessary adjustments/software are in place.”

The judge said that Howlett Clarke rejected Mr Schaverien’s request for a salary review in October 2016, noting that his salary was the highest in the firm.

The following month there were further disagreements on the University of Sussex annual mooting competition, which had been sponsored by the law firm for around 15 years.

In Ms Gillespie’s own words, Mr Schaverien “came to the rescue” after discovering that all the arrangements were not in place just before he left to attend it.

Judge Andrews said the day after the moot, the claimant sent a memorandum to the firm’s marketing manager, “expressing his disappointment that no marketing initiatives appeared to have been undertaken in relation to the moot”.

The incident escalated and Mr Schaverien was summoned to a meeting to discuss the issue in December 2016. Judge Andrews said that, despite the firm’s denial, the meeting amounted to a disciplinary process.

The following month there was another incident over IT issues, this time involving Warren Robertson, the other equity partner in the firm apart from Ms Gillespie.

The tribunal heard that Mr Schaverien was “very angry with Mr Robertson and expressed that anger forcibly and that at some point Mr Robertson shouted words to the effect of: ‘I’m busy, don’t waste my time, go away.’”

This led to an investigatory meeting in January 2017, attended by Ms Gillespie and Mr Robertson, along with the claimant.

Mr Schaverien was invited to a disciplinary meeting the following month, where he was given a written warning. He appealed under the firm’s procedure but resigned before the outcome – which was to revoke the warning – was made known.

The tribunal upheld the former managing partner’s claim of indirect disability discrimination, in part, and that the law firm breached its duty to make reasonable adjustments.

Judge Andrews said that at the investigatory meeting in January, Ms Gillespie and Mr Robertson failed to engage with what the claimant was saying.

“They had become so used to the claimant being able to do everything that a sighted solicitor could do, they became complacent about their responsibilities – as an employer – in this regard.”

Judge Andrews said that at the same meeting, when the claimant “expressly said the meeting had failed to take into account his blindness”, a duty arose to seek clarification as to what he meant.

“This was not done and in fact there was no reaction from the respondents.”

The firm failed to make reasonable adjustments when it rejected Mr Schaverien’s requests to hold the various disciplinary meetings in his office.

The tribunal said the issue of remedies would be decided at a further hearing later this month.

An application by Mr Shaverien for the tribunal to reconsider its decision was dismissed. Judge Andrews wrote: “There is no reasonable prospect of the original decision being varied or revoked.

“All the findings and matters referred to in the application were extensively considered in the tribunal’s original deliberations and the respective merits of the majority and minority views were discussed at length.”

Ms Gillespie told Legal Futures: “It is regrettable that, given the length of relationship between the firm and the claimant, that the matter went to an employment tribunal.

“However, the firm was very pleased that the vast majority of the judgment was in the firm’s favour.”