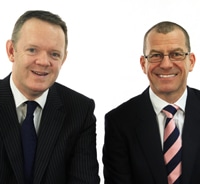 Aspire Law will open for business on 3 November, offering a specialist service to people with spinal cord injuries.

Operating profits will be shared equally between the two, who have also committed to making no deductions from claimants’ damages.

Moore Blatch partner Damian Horan, who is also Aspire Law’s legal director, told Legal Futures that he hoped other charities would be interested in such an arrangement.

The idea originated with one of Aspire’s trustees, who in his day job had been looking at ABSs. Mr Horan said they then researched client experiences, expectations and concerns around legal claims resulting from spinal injuries before settling on a business model.

This showed that clients wanted more face-to-face support and greater levels of integration with wider support services. The result will be a service that will tackle every issue arising from spinal cord injury, from the legal work to housing, education, care and rehabilitation, as well as emotional and family support.

Mr Horan said he hoped Aspire Law would establish itself as a market leader: “We believe Aspire Law will provide genuine competition within the market, as the business uses an innovative solution that combines strong legal expertise with charitable values, putting the needs of those with spinal cord injury above all else.”

He acknowledged that the profit-sharing agreement meant that commercially Moore Blatch would not make as much as it otherwise would on each case, but said he expected an increased volume of work to compensate for this.

“I’ll be interested to see how other charities will respond to it. I’m not sure people thought a national charity would be an obvious bedfellow [for a law firm],” Mr Horan said, adding that the pair had spent “quite a lot of time” understanding each other and their cultures.

Brian Carlin, chief executive of Aspire, said: “The income generated from this venture will lead to substantial support for other spinal cord injured people, who aren’t in a position to receive compensation claims, but can benefit from many of the services which we operate and will develop in the future.”

Mr Horan said the Solicitors Regulation Authority had been keen on the idea and processed its ABS application in two and a half months.

Aspire Law has a board made up of representatives from both sides. One of Aspire’s is trustee and charity law barrister Francesca Quint, a member of Radcliffe Chambers in London.