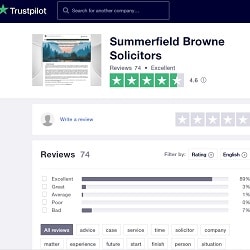 A screenshot of the Summerfield Browne Trustpilot page last night

The High Court has awarded a law firm damages of £25,000 for a defamatory review on Trustpilot posted by a disgruntled former client who paid £200 for advice.

Commercial law firm Summerfield Browne saw new business enquiries fall in the weeks following the review being published, which Master Cook yesterday ordered Trustpilot – which was not a defendant – to remove.

As of last night, the review was still there, one of five one-star reviews the firm has. However, with 66 of the 74 reviews in total receiving five stars, its overall average was an ‘excellent’ 4.6 out of five.

Philip James Waymouth was involved in a dispute concerning the enforcement of a court order. He found Summerfield Browne through a web search and signed its standard terms and conditions, after which the firm gave him advice for a fixed fee of £200.

“It seems that for some reason, which he has never fully articulated, the defendant was dissatisfied with the advice he was given,” the master recounted.

But rather than complain to the firm, he left a review on Trustpilot headlined “A total waste of money another scam solicitor” (sic).

He accused the firm of simply rewording the information he had given but providing no advice on what to do.

It finished (including grammar errors): “Once they have your money they are totally apathetic towards you. You will learn more from forums, you tube and the Citizens advice website about your case, for free.”

In his defence to the libel action, Mr Waymouth argued honest opinion, public interest, truth and whether the claimant suffered serious harm. He also offered to remove the review in return for a refund of the £200.

He did not attend the remote hearing held last July, at which Master Cook struck out the defence of honest opinion, as the law says this cannot succeed where the words used – in this case, ‘scam’ – convey an allegation of fraud.

The master gave summary judgment on the other two defences, accepting that Mr Waymouth had no real prospect of establishing that publication was in the public interest.

In any case, demanding money to remove the review “wholly undermines the defence of public interest”, he continued.

“Also it was apparent that the defendant made no attempt to engage in the claimant’s dispute resolution process. A complaint should always be the first stage in resolving any issues of customer satisfaction.”

When it came to the defence of truth, “it seems to me the defendant’s allegations are so bold that in the complete absence of any credible material to support them I can conclude there is no real prospect of them succeeding at trial”.

The “highpoint” of the material submitted by defendant was that he was “unhappy” with the service the firm provided, the master said.

Master Cook ordered Mr Waymouth to file an amended defence dealing with serious harm. The litigant in person did not comply and the defence was struck out in August, with judgment entered for the claimant.

The hearing yesterday dealt with relief. Evidence from Summerfield Browne director Tessa Rhodes was that the firm relied heavily on the internet to drive potential clients to call, and after the review went up the number of enquiries fell markedly for around five weeks, from 50-60 per week to 30-40.

The firm actively encouraged existing and past clients to leave positive reviews to counter the effect of Mr Waymouth’s, as a result of which “there has been a slow increase in the number of enquires”.

Master Cook ruled that it was “beyond any dispute that the words complained of had a clear tendency to put people off dealing with” the firm.

“It is difficult to conclude that the defendant had any other purpose in mind when posting his review. It is a serious matter to accuse a solicitors’ firm of dishonesty and any such allegation is likely to deter those who are unfamiliar with the firm from using its services…

“Given the manner in which the claimant conducts its business I conclude that a substantial number of potential clients were put off and that there has therefore been a financially damaging impact for a period of at least three to four months.”

The firm asked for and was awarded general damages of £25,000 – which the master said would “adequately reflect the seriousness of the defamation, the financial loss which has occurred and the purpose of vindication”.

However, he rejected a claim for special damages of £300 per day for at least six weeks for the lost instructions, as the firm had not provided detailed financial or accounting evidence to support this.

Master Cook issued a permanent injunction ordering Mr Waymouth to remove the review and restrain him from re-publishing it. But given it was highly unlikely he would remove it, he ordered Trustpilot to do so.

Finally, the master, as requested by the law firm, provided a narrative judgment for publication on BAILII and also awarded it costs.