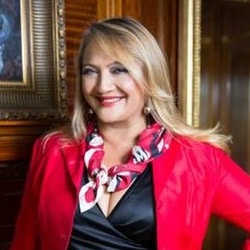 Vardag: Dress code was the subject to extensive newspaper coverage

The family law firm that made national news recently after details of its dress code were leaked has secured an order to prevent a former employee from disclosing further information.

However, Legal Sector Workers United (LSWU), which is representing the former worker at London firm Vardags, also claimed victory at the hearing, following which a war of words has broken out between the two sides.

In September, there was widespread coverage of a leaked memo sent last year by high-profile founder Ayesha Vardag, which went into detail about suitable office attire for staff, including that female staff could dress in a “discreetly sexy” way, but “never tarty”.

Vardags said it had to apply for a court order – which was eventually granted by consent – after “several unsuccessful attempts” to obtain the employee’s co-operation voluntarily. She finally offered the reassurances the firm had sought a few days before last Friday’s hearing.

“Specifically she did not deny having already disclosed confidential information including, in particular an all-staff email about our dress code.

“Our costs and our counsel’s costs, in the amount of approximately £68,000, have been reserved for a future occasion. The former employee’s application to have our costs capped was dismissed.”

However, according to LSWU: “The High Court battle saw the firm Vardags apply for an interim injunction and costs of £68,000, along with an order requiring the ex-employee to provide certain information within 24 hours. Vardags even sought to have the application heard in secret but on all these points their position was rejected by the court.”

Vardags said the former employee – who it said was dismissed at the beginning of 2020 for poor performance – has brought a disability discrimination claim against the firm, which it is contesting.

“After we declined to make a proposal to settle her claim, we believe that she leaked our confidential information to third parties.

“There is clear evidence that upon the day that she was given notice, she forwarded certain confidential information to her private email account in violation of her employment contract and our IT policy.

“And there is clear evidence that some of this confidential information was shared with a third party. She has not denied responsibility.”

The former employee is represented by Zachary Whyte of Montague Solicitors and an LSWU member, acting pro bono.

Vardags said LSWU approached employees at the firm earlier this year, but “as far as we are aware none of them took the bait”.

It went on: “We are concerned that United Voices of the World [UVW, the wider union of which LSWU is part] is keen to have a cause célèbre, and has targeted a law firm with a high public profile to do so.”

The firm quoted the union’s website, which said in July: “As UVW has gone from strength to strength we have learnt how to identify a boss’s Achilles heel and to hit them where it hurts!”

The Vardags statement concluded: “We will not be at the mercy of spurious and false claims and vindictive breaches of our confidentiality, to pay people off when we know we have done nothing wrong. At some point, one has to take a stand. This is where we take ours.”

In response, Petros Elia who sits on the union’s executive committee, said: “Vardags has chosen to impugn our legitimate trade union activities in defending and promoting the interests of our members.

“They and other bosses in and beyond the legal sector should be in no doubt that we will continue to do so, and we are considering our options in relation to Vardags’ public statement.”

Mr Whyte added: “This victory is a demonstration to powerful employers that we will not allow them to use their finances and the legal process to gain an advantage over employees they have dismissed. We will now do everything to win our member the compensation she deserves.”

He instructed Michael Sprack of 1MCB to appear at last week’s hearing.

Vardags also said that it forced the LSWU to rewrite its initial press release about the hearing: “While it still contains a number of factual inaccuracies it does at least remove many of the defamatory statements of the previous draft.”