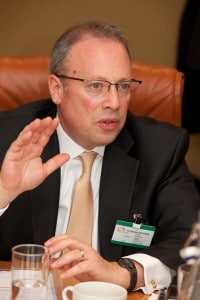 Speaking at a panel session on innovation, Mr Eisenberg said there would be “plenty of opportunities” for young lawyers.

“Legal services will be cheaper and more accessible in the future and legal advice less obscure. There will not only be more diversity within law firms, but a greater diversity of career choices for young lawyers.

“It is going to become a somewhat younger profession. This will be healthy for clients, legal services generally and law firms that can grasp the opportunities.”

Mr Eisenberg said the forces now driving change “more rapidly” than before were pricing pressures and commoditisation of legal services, helped by “massive advances” in technology.

He said global law firms could achieve economies of scale and “really invest” in change, while international practices could also be flexible in resourcing work.

Mr Eisenberg added that the ability to draw on “flexible resourcing opportunities”, like his firm’s Lawyers on Demand service, would be the “secret of success in the future”.

She said her legal department needed lawyers with experience, but PQE was less important than being “quick and smart”.

Ms Apostle said this could apply to lawyers young and old, but “cultural fit” was the key thing for recruitment at Twitter.

Ms Apostle said half of Twitter’s employees were engineers, solely devoted to developing new products or improving existing ones.

“Innovation creates new legal risks. Many of them have no legal precedents for us to draw on. There are three or four of these a day, in my case.”

Ms Apostle said most of Twitter’s lawyers were specialists – the only exceptions being general counsel and those in international positions.

She added that most of the firm’s lawyers were North American, and required to have a degree in something other than law, such as computer science. This, she said, led to “greater diversity” in the backgrounds of staff.

Speaking at a later session on the future of the law, David Morley, worldwide senior partner of Allen & Overy, said there would be a “kaleidoscope of options” for people starting legal careers.

“For young people entering the law there will be an explosion of opportunity”.

Professor Richard Susskind, IT adviser to the Lord Chief Justice, told delegates that people were entering the legal profession now had “no idea how it is going to end up.”

He went on: “You can’t plan your career in the way we did. People will have to have a far more flexible approach.”

The professor revealed that he was working on a book about the future of legal careers with his barrister son, and one of the themes would be “mastery of tasks” rather than training for a particular job.

“The future will look nothing like the past,” he added.