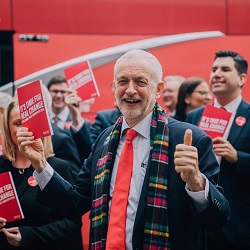 The Labour Party’s election manifesto, launched today, suggests the party is only going to roll back one element of the planned personal injury reforms if it forms the next government.

It has also pledged to review the court modernisation programme.

Labour was strongly opposed to the government’s whiplash reform programme during its passage through Parliament, but this has not made it into the manifesto.

It said: “We will defend workers’ ability to recover legal representation costs from negligent employers. We will keep the right for workers to be represented and recover their costs in cases of employer negligence leading to injury at work.”

Under the current plans, the small claims limit for employers’ liability claims will double to £2,000, along with the limit for public liability, a move that has been consistently attacked by trades unions.

The limit for road traffic accidents will rise to £5,000 – expected to cover some 90% of all such claims – and a new electronic portal for people to bring their own claims is being built, although there is now a widespread belief that it will not be ready for the current deadline of April 2020.

The manifesto reiterated the promise made in September to provide free legal training for 200 community lawyers, establish more law centres, and reverse all the cuts to legal aid-funded Early Legal Help.

Further, Labour would guarantee legal aid for inquests into deaths in state custody and the preparation of judicial review cases, consult on the civil legal aid means-test levels and act on the criminal legal aid review.

The accompanying guide to how much Labour’s manifesto would cost and be paid for said that, using Ministry of Justice figures, the total value of claims for Early Legal Help fell from £256m in 2009-10 to £93m in 2018-19, a fall which it adjusted for inflation to £226m. Inquests would cost a further £5m a year.

Labour would provide £18m over five years for the 200 social welfare posts. “These will be based in specialist social welfare agencies such as law centres or other legal aid providers,” it said.

“This will build on the success of initiatives already underway such as the Justice First Fellowship, where each fellowship place costs £80,000 over two years including the salary costs plus 50% to fund the supervision and associated costs of hosting a fellow with an additional administration fund for centrally managing and expanding the scheme.

“Labour has been working with experts in the law centres movement on a blueprint for a sustainable expansion of the current network of 60 law centres, based on a £20m investment over five years. Their final report will be published in spring 2020.”

On the courts, the manifesto said: “A Labour government will halt court closures and cuts to staff, and undertake a review of the courts reform programme.

“We will facilitate a more representative judiciary while upholding its independence, and review funding for the Crown Prosecution Service.”

It also said it would use the recent report of the Commission on Justice in Wales to improve the justice system in the country.

Labour said it would end the sale of new leasehold properties, “abolish unfair fees and conditions, and give leaseholders the right to buy their freehold at a price they can afford”.

The Liberal Democrat manifesto, released yesterday, did not mention to personal injury reforms, but pledged to establish “a new right to affordable, reasonable legal assistance, and invest £500m to restore legal aid, making the system simpler and more generous”.

Both Labour and the Liberal Democracts said they would introduce no-fault divorce, with the latter also promising to extend limited legal rights to cohabiting couples, such as greater protection in the event of separation or a partner’s death.