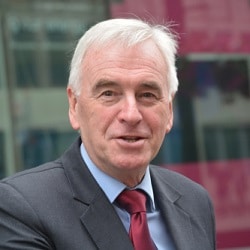 The Labour Party will look at the role of privilege in hindering the criminal prosecution of professionals advising on tax avoidance, shadow chancellor has said.

John McDonnell said he wanted to strengthen the sanctions for those who facilitate it.

In an interview with The Sunday Times yesterday, Mr McDonnell said he was drawing up plans for Labour’s manifesto against the “enablers” of tax avoidance, including the big accountancy firms.

“It’s about ensuring that where we find that they are enabling tax avoidance that they pay for it,” he said, telling the paper the sanctions for schemes that exploit loopholes in the tax laws “still aren’t great enough”.

The paper said Mr McDonnell wanted to see “bigger fines” for “people who devise and promote and sell” these schemes, but also “toughening the existing criminal offence of facilitating tax evasion”.

This meant going to prison: “You can already take criminal sanctions against them but we want to review that because people think they are not severe enough.”

This meant looking at the confidentiality rules between clients and their advisers.

“There’s been the use by some of an argument around professional privilege to prevent them being open and transparent about the advice and activities they are undertaking,” Mr McDonnell told the paper.

“We want to have a reform of the concept of professional privilege for these firms and individuals to prevent them becoming enablers.”

He acknowledged that this would spark “a huge debate”, but continued: “If you were advising someone how to burgle a house, you wouldn’t be able to use professional privilege, would you?”

Mr McDonnell said he also wanted to change the people writing the tax laws. “Part of the problem with regard to HMRC [HM Revenue & Customs] is that a lot of the advisory groups they have, the people who sit on them, are from the very accountancy firms that then go off and advise on how to avoid the tax that they are designing. We need a supervisory board for HMRC.”