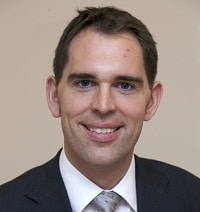 ‘Dispersed’ firm Keystone Law has set out an ambitious growth strategy for the firm in the wake of taking external investment, which will see it more than double the number of its offices.

Operations director William Robins told last week’s Legal Futures Annual Conference that the alternative business structure, currently based at two offices in London and one in Bristol, would have eight offices “relatively soon”.

Internationally, Mr Robins said he expected the process would “take a bit longer, but it is definitely going to happen”. A year ago it made a first move overseas by expanding into Australia.

Keystone announced a £3.15m investment from private equity firm Root Capital last month. Root Capital took a 35% stake in the law firm and its managing partner, Simon Philips, took a seat on the board.

Mr Robins said Keystone’s need was not primarily for the capital to be used immediately, but for an “outside viewpoint” on things. He said Root provided an expert management consultancy, together with capital “for later”.

Mr Robins went on: “We’re an ABS, so we’re able to be a lot more fleet of foot. If we see a business opportunity out there, we can race after it, and we’re not so constrained by regulation.”

“We particularly wanted to invest in technology – a lot of which we have to build ourselves,” Mr Robins said. “Quite frankly, there isn’t really anybody in the market selling stuff which meets the requirements of a law firms structured like ours”.

Speaking alongside Mr Robins, Mr Philips said the “holy grail” for external investors was an “investable business model” which offered good returns, and Keystone could be the “exception to the rule” in the legal world.

“Many firms, and I suspect particularly traditional partnerships, although they can be fantastically successful in delivering legal services, don’t lend themselves to being investable business models very easily.

“I don’t just mean the structure – I mean the culture and the whole of those businesses.”

Mr Philips said a lot of private equity firms of all sizes were looking at the legal services market and although “not many deals” had been done, “there is interest”.

He added: “For those entrepreneurs in the legal world who come up with interesting business models and new angles, the money will be there.”