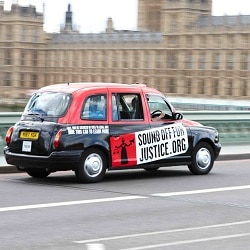 Sound Off for Justice: Taxi made the point

Lawyers have been urged to look at radical new approaches to ‘rebrand’ justice so as to build public and political understanding of its value.

Speakers at an event in London yesterday to mark the start of the first Justice Week said more needed to be done to make people care about justice.

Justice Week is a new initiative of the Bar Council, Chartered Institute of Legal Executives and Law Society that aims to put justice and the rule of law “at the centre of public and political debate”. It has succeeded National Pro Bono Week.

Well-known legal journalist Joshua Rozenberg said the reason the public was not listening to the profession’s complaints about the justice system was that “they don’t think it has much to do with them… Compared to the health service and education, relatively few people use the justice system”.

Also, newspaper coverage of justice issues was patchy – only The Times, The Guardian and Financial Times have dedicated legal reporters – and legal stories were generally expected to fit certain pre-conceived notions and stereotypes.

Nik Govier, chief executive of PR and communications agency Blurred – who ran the pre-LASPO Sound Off for Justice campaign for the Law Society – said the problem in making the public, and as a result the government, care was that justice was “so intangible”.

Sound Off for Justice employed innovative campaigning techniques, including taxis offering free rides allowing passengers to use an iPad or iPhone to sign an online petition or leave a voicemail for the then justice secretary Ken Clarke.

Ms Govier said issues needed to be “relatable”, she explained – while in 2011 the campaign was based on what could happen, now it would be able talk about what has happened to the likes of Liam Allen, the student wrongly accused of rape due to prosecution disclosure failures, and the parents of Charlie Gard, who had to fight their case without legal aid.

Ms Govier added that she would root any campaign “in the British sense of fair play” and suggested that, in the #MeToo era, Lady Justice could become a potent symbol for it.

Laura Townshend, campaigns director of 38 Degrees, a not-for-profit organisation that brings people together to take action over issues they are concerned about, said digital campaigning “could make a transformational difference”.

“At its best, there’s no better or more scaleable way of mobilising the public,” she explained, but this came with organisers having to give up some measure of control – which some did not find easy – to let the public take the lead “if you want to sincerely engage them in your cause”.

She explained how campaigns around smaller local issues were often more popular than larger national ones “because people feel them” – this could translate into individual petitions when legal aid was denied for a particular case, for example.

The “narrative” around justice was missing a story, however, Ms Townshend said: “People need to feel something is true, not just that they know it’s true.”

This meant eliciting empathy rather than sympathy, as the former meant people could relate to an issue, rather than seeing it as something that affected someone else.

Campaigns needed also to be simple, honest and give people hope, which in this context meant “defining a goal, creating a pathway and making people believe they can follow it”.

Jon McLeod, head of public affairs at Brunswick Group, pointed out that the public was “not always consistent in its attitude to justice”.

While Lord Hain was hailed as a hero by many for defying the Court of Appeal to name Philip Green last week, Tommy Robinson was vilified for interfering with the due process of the courts by broadcasting on Facebook Live from outside a Crown Court.

Mr McLeod, a one-time legal journalist and head of press for the Bar Council, said it was vital to recognise that justice was not just about the courts, and that it would most effective if all those in the “justice supply chain” – the police, Crown Prosecution Services, prison service, probation service and lawyers – could campaign together.

“Now, more than ever before, we are a society united by a number of common threats,” he argued. “Justice should be the most potential weapon we have at our disposal to fight them.”