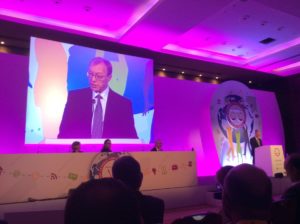 Ryder: believe in what we’re doing

Online dispute resolution “will become the norm for much of the less complex work in civil, family and tribunals jurisdictions”, the Senior President of Tribunals said over the weekend.

Giving the keynote address to the annual Bar conference on the plans for a radical transformation of the courts and tribunals system, Sir Ernest Ryder concluded his speech by urging practitioners to “believe in it”.

Sir Ernest – one of the authors of the vision statement published last month – said the impact of austerity had actually helped highlight the justice system’s limitations and be clear about what is necessary to prevent decline.

The aim that he and the Lord Chief Justice, Lord Thomas, have agreed with Lord Chancellor Liz Truss was, he said, “quite simply to strengthen the rule of law”.

He continued: “We must address lengthy delays that are inimical to justice and to welfare, processes and language that are unintelligible to all but the specialist user and a system that is at times so costly that the only solution so far has been to impair access to justice by removing legal representation.

“It ill behoves the judiciary to accept that unless they are prepared to do something about it. My colleagues and I will.

“Do not get me wrong. I do not accept that the soothsayers, the harbingers of doom or the commentators with interests to protect are right when they doubt that we have and will continue to have the best justice system in the world. Our aim is to take the best of our existing system and transform it into something that will stand the test of time.”

Sir Ernest argued that lawyers, “as members of a liberal profession with ethical obligations to each other and to the public, [have an obligation] to address the inevitable decline that will be experienced in the justice system if we do not act.

“We have an obligation in upholding the rule of law to work together to promote effective access to justice for all those who need it.”

He tried to reassure lawyers that there was a future for them, both domestically after the court revolution, and internationally after Brexit.

“The legal professions will undoubtedly come together to show what they have to offer to the various debates and changing circumstances that are prevalent.

“How can you help to improve the accessibility, efficiency and intelligibility of the justice system? How can you help ensure that justice is delivered in a timely manner and at a proportionate cost? How can you thrive in an ever-increasing global market?

“I have no doubt you will be able to find the right answer to such questions, and find the right practices and structures to take advantage of all the opportunities that both innovation and the global market provide.

“A digital world may be more effective and efficient, it may even be more accessible and proportionate, it will hopefully be swifter and more intelligible, but it does not provide a substitute for the sophisticated skills of the advocate and the litigator.”

Sir Ernest added that in more complex proceedings, “it is essential that we adopt and develop the most attractive procedural and substantive environment for the resolution of the most serious domestic and international disputes.

“The opportunity to influence ‘what works’, to propose change where it is needed, to re-write your favourite part of the White Book so that the decision tree i.e. the critical path to decision making and the sophisticated protections we have developed over many years in your specialism are not lost, is surely an invitation you will want to accept.

“We may start with self-evident digital improvements to bright line paper processes, but the greatest challenge is to continue to provide a first-class service for all forms of litigation, simple or complex.”

Meanwhile, in a separate session, Lord Justice Fulford, the judge in charge of courts and modernisation, predicted that the administration of justice across all courts and tribunals could be transferred to the “cloud” within the next four years.

Hailing the success of the digitisation process in the criminal courts over the last 12 months, he said his “critical message” was that the same changes will be rolled out incrementally to the civil and family courts and to tribunals by 2020.

“Many of us, confronted by [the changes being wrought by technology], will gaze out across green fields, listen to the skylarks and wish for a less technologically-based age. I certainly do, for I drown daily in a waterfall of emails…

“Such thoughts are, sadly, wholly unrealistic – an unobtainable nostalgia. As with all great revolutions, you either adapt rapidly or fade away.”

He told delegates: “I am sorry to be uncompromising, but we have simply got to change, and judges and practitioners in all jurisdictions and at all levels must rapidly get used to the administration of justice being transferred, in large part, to the cloud.”

The judge bemoaned the “very low starting point” for the reforms, which meant the courts were working from a “very cold start”. The “lack of digital investment” over too many years, he said has “hugely increased the difficulties of implementation in 2016,” he said.

Notwithstanding this, the changes over the last 12 months, he said, have been “extraordinary” and met with an “overwhelmingly positive” reaction.

Most impressive, he reported, was that the entire Crown Court judiciary, in the space of 10 months, has moved from a paper-based system to an e paperless court, courtesy of the DCS (digital case system).

His Honour Judge Martyn Levett, one of the lead judges in implementing the digital system, told delegates that the better case management coupled with digitisation had reduced the number of ineffective trials at Ipswich Crown Court from 23% to 10% over the last 10 months, and increased the guilty plea rate from 50% to 70%.

Fulford LJ noted that some criminal judges had expressed “strong early scepticism” of the scheme. But he said: “The remarkable phenomenon is that quite elderly, technologically challenged judges who vowed they would never touch a keyboard in court, are now working entirely digitally with skill and enthusiasm. Already, the paper processes of last year feel utterly ridiculous and outmoded.”

He emphasised that while physical hearings would only be held in future if necessary and proportionate, every decision about substantive rights would still be made by a judge and the main elements of conciliation conducted by a human being.

The judge also stated that the judiciary was “fiercely committed” to the principle of open justice. “Greater digitisation offers both challenges and opportunities in this field, in that technology enables more data to be gathered that can be made accessible than historically has been the case…

“We will need to find ways in which the public can gain access to telephone, video and online hearings. I am determined that we will not throw a cloak of secrecy over our processes, but this is going to need imagination and commitment.”