Judges, not HMCTS, will have “final say” on video hearings 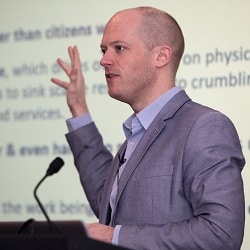 Goodman: We work hand in glove with the judges

Judges are “embedded” in all the projects that make up the £1bn court modernisation programme and whether hearings are held by video or person will always be a matter of judicial discretion, a senior official at HM Courts and Tribunals Service (HMCTS) has said.

Speaking at the Legal Futures Civil Litigation Conference this week, Richard Goodman, change director at HMCTS, said: “We have judges embedded in all of our projects, and on all of the boards and decision-making bodies that work on reform, to make sure that we and the judges are working in partnership.

“I’m a slightly odd civil servant, in that I have a joint duty both to the Lord Chancellor and to the senior president of tribunals and Lord Chief Justice. That means we work hand in glove with the judges on the development of these projects as they go through.”

Rank-and-file judges recently made clear their concerns about using video for final hearings in particular.

Reassuring delegates that video would not be imposed, Mr Goodman said: “There is no ability or desire by HMCTS to mandate what is being used. For short hearings or interlocutory work, making everyone turn up to hearings is inconvenient.

“Video hearings are not going to be right for all sorts of cases. Nobody in their right mind is going to suggest there should be a murder trial by video.”

Mr Goodman said that even where HMCTS made decisions based on the assumption that cases would be cheaper to administer and support because they used video conferencing, for example, the decision would remain with the judges.

“The kind of hearing will vary massively depending on the type of work you’re talking about and the kind of jurisdiction. This will be under judicial control ultimately.”

Mr Goodman said the decision by HMCTS to extend the deadline for completion of the court modernisation programme from 2022 to 2023 was the first time it had been extended.

He stressed that although “at its conceptual phase in 2015” plans were drawn up for the programme to run for four years, following discussions with the Treasury and Cabinet Office “that was deemed to be heroic”, so the timeline was changed before the start to six years.

“What we’ve been very clear about throughout is that this is a very challenging and ambitious programme. Some people view this as a criticism. I am proud of it.

“At the first international conference of online courts in December, what was very clear was that England and Wales, which currently occupy a pre-eminent position as the leading legal jurisdiction globally, are cementing that by being ahead of every other jurisdiction on online courts.

“I am pleased we are ahead of the competition. What we mustn’t do is do something fast rather than doing it better or put our heads in the sand where we need more time to do something better.

“The evidence is that we need more time, particularly this year, so we’ve got the underlying components ready to be reviewed and tested properly rather than rushing ahead, doing a botch job and looking back with regrets in 2022.”

Mr Goodman said the programme did intend to save money but that was not “antagonistic” to what it aimed to do.

“People used to send 40% of our divorce applications back because they’d been filled in incorrectly. The form was hard to understand and difficult to fill in. That figure fell from 40% to 0.4% digitally. Designing the system around the people who use it, intuitively, saves time and effort.”

He concluded: “The proof of the pudding is always in the eating. This service is live and real. It works well and people like it.

“We will see if that holds true in the legal profession over the future as well. There are some things I won’t be able to make go away overnight. I don’t have the money to knock down the court estate tomorrow and rebuild it to make it really nice. I wish I could.

“Significant numbers of our courts were used last year for half of their available time. If we can show we’re making the best use of them, it puts me and others in a better position in difficult conversations with Treasury colleagues, at a time when public money is tight, to say we need to carry on investing.”