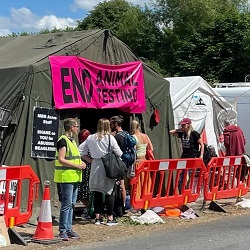 Camp Beagle: Solicitor was there to offer advice

A High Court judge has rejected a potentially “career-ending” contempt application against a solicitor, describing it as “wholly frivolous” and totally without merit.

Mr Justice Nicklin said the claimants, among them the operators of a facility in Cambridgeshire which breeds beagles for medical research, argued that Gillian McGivern knowingly breached an injunction granted to control protests outside the site.

First a barrister and then a criminal defence solicitor-advocate for 30 years, she said she had attended the site to see if the protestors at what is called Camp Beagle might need legal advice and that she was unaware of the injunction at the time.

The judge said the claimant had not explained why Ms McGivern would “risk everything” to breach it.

For Ms McGivern, “the personal and professional stakes could not have been higher” because she risked being struck off “in addition to any penalty imposed by the court”.

The court heard that the solicitor was accused of parking her car in what had become an exclusion zone under an injunction obtained by the breeding facility in November 2021 against ‘persons unknown’.

She was accused of getting out of her car and blocking two cars that were trying to leave the site by standing in front of them.

Nicklin J said Ms McGivern had “never disputed” the facts of what she did or that they were a breach of the injunction, but denied any knowledge of it.

Describing her as “a conspicuously honest and careful witness”, the judge said he accepted her evidence as “truthful”, in particular her denial that she was shown the injunction on a police officer’s laptop the month before, when she was defending one of the protestors in court on a criminal charge.

Nicklin J said: “In my judgment this contempt application has been wholly frivolous, and it borders on vexatious. The breaches alleged were trivial or wholly technical.

“Apart from a technical trespass, it is difficult to identify any civil wrong that was committed by Ms McGivern. At worst, obstructing the vehicles for a short period might be regarded as provocative, but there were no aggravating features.

“As the claimants must have appreciated, this was not the sort of conduct that the injunction was ever intended to catch. The court does not grant injunctions to parties to litigation to be used as a weapon against those perceived to be opponents.”

She self-reported the contempt application to the Solicitors Regulation Authority and stopped working as a solicitor, even though the regulator said she could continue, because of the stress she was under.

Nicklin J quoted the solicitor as saying in her testimony: “If I lose, I could lose my home. I will lose my reputation. I haven’t slept, I have barely eaten. I might sound coherent, but I am falling apart.”

Nevertheless, the judge said the claimants “persisted in a cross-examination of Ms McGivern in which allegations of the utmost seriousness were made suggesting, not only that had she, a solicitor, had deliberately breached a court injunction, but that she had brazenly and repeatedly lied for over a day in the witness box”.

The judge described the evidential support for this line of cross-examination as “tissue thin”.

Since this was the first application made by the claimants which would be certified as totally without merit, he could not impose a civil restraint order on them, but the court had the power to require them to obtain permission before bringing “any further contempt application against anyone alleged to be in the category of ‘persons unknown’ and to have breached the injunction”.