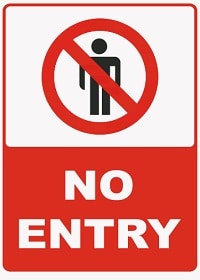 A district judge has explained how he had to throw a McKenzie Friend out of his court after she disrupted proceedings and threatened complaints against him and the other side’s solicitors.

Mary Bennett was aiding the husband in the final hearing of a wife’s application for financial remedies in a divorce.

District Judge Nicol in Basingstoke recorded: “On the second day of the hearing, at the lunchtime adjournment, there was an outburst from her, during which she would not leave the court and threatened complaints against me, the solicitor for the wife and criminal sanctions against the wife.

“In consequence of her outburst, which was the last in a series of interruptions, I decided that her conduct disrupted the proceedings and I excluded her from the courtroom for the rest of the hearing.”

He said he had recorded the events because of her threat and the possible need in future to refer to them.

DJ Nicol said that, at the start of the hearing, Mrs Bennett made an application for rights of audience on the grounds that the husband was ill and confused. She also said she had considerable experience in the employment tribunals.

“When I questioned Mrs Bennett, rather than consider the question and provide an answer, she seemed to have her own agenda and commenced her first response with the words ‘this woman’ (referring to the wife) in a most aggressive and (in my opinion) derogatory way.

“That initial communication led me to the conclusion that Mrs Bennett’s participation in any way other than acting as McKenzie Friend was likely to lead to an inflammatory situation which in turn, was likely to disrupt the proceedings.”

In any case, after speaking to the husband, the judge said he considered that, “far from being confused about the proceedings he was perfectly capable of conducting his case himself”.

The judge continued: “I refused Mrs Bennett’s application. As things turned out, my decision was justified.”

She interrupted the hearing five time on the first afternoon. “She interjected when the husband was trying to cross examine the wife. She tried to give evidence herself. I warned her on those occasions that she risked expulsion from the court if she persisted.”

There was a “minor interruption” during the second morning which led to a further warning.

“Thirdly and far more seriously, at the luncheon adjournment, the husband was in the middle of his evidence and he was given the usual warning that he should not speak to anybody about his evidence or the case generally during the adjournment. Mrs Bennett thereupon wrote a note on a piece of paper and referred the husband to it (having just heard the warning given).”

When the judge asked what was in the note, Mrs Bennett responded with the “tirade” that led to her exclusion.

DJ Nicol concluded: “The husband was perfectly capable of speaking for himself and I am satisfied that he suffered no prejudice as a result of having to conduct his own case.”