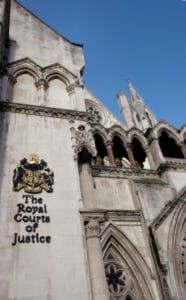 A High Court judge has referred back to the Solicitors Disciplinary Tribunal (SDT) the case of two partners he found to have displayed “manifest incompetence” in accepting £573,000 lent to their law firm by the controversial Axiom Legal Financing Fund.

Mr Justice Holman admitted that he felt “frankly embarrassed” to make the decision having adjourned the case in December so that he could decide what sanction should be applied to David Wingate and Steven Evans at last month’s hearing.

“It is my view that because the appropriate sanction is not at all self-evident in this case (as it would have been if there had been dishonesty), it is more appropriately decided by the expert professional tribunal.

“Frankly, they have, or should have, a far greater grasp than me of the approach to sanctions in a case of this kind; and they certainly will have a far better grasp than I do of the working of a small firm of solicitors such as this, when it comes to considering the scope of any conditions of practice, if it is appropriate to attach them.”

The full transcript of Holman J’s original ruling – which we covered in January from a Lawtel report – is now available. It was a rare prosecution appeal by the Solicitors Regulation Authority (SRA) against an acquittal.

As in all of the disciplinary cases involving the Axiom fund, the case turned on the funding agreement between Axiom and the firm, the aim of which, on its face, was solely to fund personal injury cases but which was varied orally to allow any other uses – in this case on the basis of assurances from a ‘Mr H’ and Richard Barnett, a former member of the Law Society council who was himself struck off for his involvement in the fund.

The two solicitors, who are the partners of Manchester personal injury firm WE Solicitors, were cleared of the main allegations of wrongdoing.

In the case of Mr Wingate, who dealt with the funding, the SDT found he was entitled to believe the assurances Mr H and Mr Barnett had provided.

But Holman J found the tribunal took the wrong approach and did not ask itself the key question of whether it was “professional misconduct for a solicitor to sign a solemn written contract which he knew (on his own case) was not what had been agreed, which he had no intention of carrying out, and with which, so far as concerned repayment, he knew he could not comply”.

The judge said: “In my view, whether Mr Wingate admitted it in his oral evidence or not, the solemn written contract was, on his own account of the facts, a complete sham. Solemn written contracts, especially for borrowing so large a sum of money, have a very important place in any legal system. They ought not to be signed by anybody lightly, and they certainly should not be signed by a lawyer lightly.

“Further, it would not maintain, but would tend to undermine, the trust that the public places in solicitors if the public knew that in order to obtain a significant loan for the purposes of his firm and himself, a solicitor had, in whatever circumstances, signed a sham contract.

“I am driven to conclude, and any tribunal acting rationally would have been driven to conclude, that at the point when he signed that sham contract and then drew down the money pursuant to it, Mr Wingate did not act with integrity, in breach of [SRA] principle 2, and did not behave in a way which maintains the trust of the public in him and, importantly, in the provision of legal services, which includes the provision of contracts, in breach of principle 6.”

Holman J said also that the tribunal should have made a finding of “manifest incompetence” over Mr Wingate’s failure to “to spot the dubious nature of the transaction”.

He had been “highly gullible” to accept an assurance from Mr Barnett that a redrafted agreement would be forthcoming.

Mr Evans’ evidence was to the effect that it was Mr Wingate’s job to deal with the finances, and that he trusted his partner to carry it out. Mr Evans did not even read the funding agreement.

The judge said that it was “inescapable that Mr Evans demonstrated a manifest lack of competence such as would undermine, rather than maintain, the trust the public places in him in breach of principle 6”.

He explained: “To my mind, Mr Evans was under an obvious and high duty to take basic steps to satisfy himself as to the propriety of the loan, and that the manner in which they proposed to defray it was permissible and within the terms of the loan agreement.

“As an absolute minimum, he needed to read for himself the written funding agreement signed by Mr Wingate on behalf of the firm, and therefore on behalf of himself as one of the two partners in the firm.

“The tragedy of this case is that if Mr Evans had done so and if he had then tackled Mr Wingate as to the divergence between the terms of the written agreement and the manner in which Mr Wingate was proposing actually to apply the funds, this case might never have arisen.”