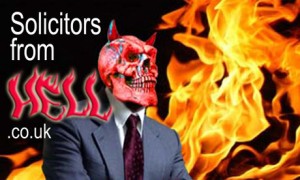 A High Court judge has ordered the take-down of pages of an anti-solicitor website that contain defamatory statements about a law firm, after a litigation opponent alleged their publication was “evidence that the firm was disreputable”.

Although the operators of the SolicitorsFromHellUK.com (SFHUK.com) website could not be identified, Mr Justice Warby granted injunctive relief to niche City firm Brett Wilson after defamatory statements appeared on the site.

The judge said the registered owner of SFHUK.com, Anonymous Speech, appeared to be “an organisation which specialises in providing proxy services to those who do not wish to be traced”. Despite Brett Wilson’s efforts to contact them, there was no response.

Brett Wilson, which specialises in litigation and regulatory work, acted for the law firm claimants in the case against Rick Kordowski, founder of the original Solicitors from Hell website, which led to its closure in 2011. “Now the firm itself has been targeted, via a web address which is a simple variant of the original,” Warby J said.

The law firm said it had suffered financial loss from a letter published on the website purporting to be from a former client, claiming he had been overcharged and threatened when he refused to pay. The offending words are still live on the internet, up to a year after they first appeared.

The judge said he was persuaded that the test in section 1(1) of the Defamation Act 2013 had been met and that the “publication has caused or is likely to cause serious harm to the reputation of the claimant”, because of the breadth of the harm alleged.

Brett Wilson said a snippet of the offending document appeared within the top five listings of a Google search on the firm’s name for six months and had deterred an unknown number of clients from instructing it.

As evidence, it said it knew of a prospective client who had previously indicated he wished to instruct the firm but withdrew his instructions as a result of the publication.

Further, in April 2015 “a litigation opponent raised the publication as evidence that the claimant was a disreputable firm”.

The law firm sought mandatory orders for the removal from the Internet of specified webpages, and from the SFHUK.com website of any metadata or search engine links which referred to the claimant as ‘solicitors from hell’ or ‘lawyers from hell’.

Warby J said he “hesitated at first over the mandatory orders”, partly because he wondered if they “would impose obligations which the defendants might be unable in practice to perform”.

But he concluded that “given the way the defendants are described and defined, I consider that these aspects of the order sought are legitimate”.

He allowed the firm’s application for summary disposal pursuant to sections 8 and 9 of the Defamation Act 1996 “in order to bring a swift end to the matter and avoid assessment proceedings which might well be disproportionately expensive”.

The judge awarded damages of £10,000. He said: “It is beyond dispute that the words complained of had a clear tendency to put people off dealing with the claimant firm. That was their evident purpose. The allegations are serious, and would be likely to deter anybody unfamiliar with the firm from engaging its services…

“There is affirmative evidence that in all probability one client was deterred, with probable financial loss… I have no doubt that others were put off, and that there has been a financially damaging impact on a serious scale. Quite apart from this, the award needs to serve the purpose of vindication.”

Brett Wilson partner Nick Brett said: “As a firm specialising in online defamation, we understand how damaging false and defamatory postings on the internet can be.

“The fact that a defendant is not identifiable should not be a bar to an aggrieved party seeking redress, particularly where one can look to third parties (such as Google in this case) for assistance and obtain a vindicatory award that they can point to.

“Whilst at the present time there is insufficient evidence to identify the operator of this website, efforts to do so are ongoing and the firm intends to take steps to enforce the order in the event of non-compliance.”