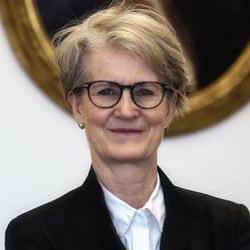 A High Court judge married to a senior Conservative politician refused to recuse herself from dealing with a contact dispute that involved a disgraced ex-Tory MP, it has emerged.

Mrs Justice Arbuthnot said that Andrew Griffiths, who was last year found to have raped his ex-wife, was mistaken in his belief that she had met him on several occasions.

The judge is married to James Arbuthnot, a Tory MP from 1987 to 2015, since when he has sat in the House of Lords.

Mr Griffiths, who was elected in 2010, resigned from government in 2018 after a newspaper exposed the 2,000 sexually explicit texts he had sent to some constituents. He was not reselected to stand at the 2019 election and was succeeded by his ex-wife, Kate.

Last month, the Court of Appeal issued a landmark decision giving permission for the press to publish findings made by a circuit judge in Derby about the physical and emotional abuse, rape and coercive behaviour Kate Griffiths experienced at his hands.

In June 2021, the circuit judge also made an interim contact order and in October Arbuthnot J heard Ms Griffiths’ appeal against it, reserving her judgment.

A week later, Mr Griffiths’ solicitors, Griffins Law, wrote to the judge to say he had learned who her husband was.

In a ruling from 9 December only published on Friday, she explained: “Mr Griffiths’ concerns are the following, that he knew my husband well and had met me on ‘many occasions’ or a ‘number of occasions’, my husband is a senior Conservative politician and ex chief whip who Mr Griffiths assumes would have disapproved of the shame Mr Griffiths’ activities brought on the Conservative Party.

“As a result of those matters, I should now recuse myself from further involvement in this case and transfer the case to another judge to be reheard.”

But the judge said it was a “paradigm example of misidentification”: she was not aware of having met Mr Griffiths at all.

She said she had never heard of him or his “sexting scandal” before reviewing the case papers and did not recognise him at the hearing.

After her appointment as a district judge in October 2005, “I avoided involvement with most political events”, she explained.

Mr Griffiths and Lord Arbuthnot were elected at different times and from “a different generation to each other”.

Arbuthnot J observed: “If I had known Mr Griffiths, there would have been no point in asking my husband whether he knew him. Had he replied that Mr Griffiths was a friend or someone he had worked with, I would have raised this with the parties.”

She held that “a fair-minded observer when informed of the circumstances set out above, would consider that there was no immediate link between Mr Griffith’s concerns about views he imputes to my husband and me.

“This is not a case where there is a so close and direct a link so as to render a presumed interest of my husband, for all practical purposes, indistinguishable from an interest of mine.”

The judge continued that her husband stopped being chief whip in 2001. “There have been any number of scandals involving politicians between 2001 and 2018.

“I don’t accept I had them but if I have prejudices and predilections in relation to his position in the case, I should be trusted to bring an objective judgement on the issues before me (Locobail)…

“In my judgment Mr Griffiths has said nothing which would lead me to conclude that this is a case where I should recuse myself. I do not consider that that informed person, having considered the facts, would conclude that there was a real possibility that I was biased.”

The judge gave Mr Griffiths 21 days to consider what his next steps should be, saying she would give judgment once that period had passed.

This she did last Thursday, setting aside the circuit judge’s order for direct contact before final reports were ready and that Ms Griffiths should pay 50% towards the cost of contact in a contact centre.