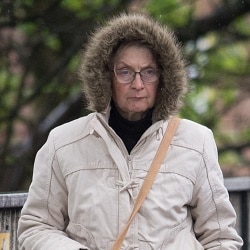 A lawyer who lost her firm, career and home after she stole client money to fund a penniless conman who falsely claimed to be a multi-millionaire has been jailed for 30 months.

Rose Egarr, 60, plundered £200,000 from her firm to give money to Michael Milner after she was ‘’sucked in’’ by his outlandish claim to be an undercover detective with £3.3m in the bank.

During a two-year scam, Milner, 49, professed to be a leading figure in the war against organised crime in the South of England – claiming to work for the elite Eastern Regional Special Operations Unit (ERSOU).

He said he had multiple bonds set up in Holland plus family trusts and was owed £300,000 in wages by ERSOU plus another £1m.

In fact Milner was an undischarged bankrupt, but set up a string of businesses and instructed Egarr to give him legal advice in a series of shady investment schemes across the North West.

Despite him making 13 failed promises of paying legal fees and filing ‘police’ correspondence on plain paper littered with grammatical errors, Egarr – who was managing partner of Arthur Smiths Solicitors in Wigan – believed Milner was still good for the money.

When he falsely claimed to be unable to access his millions as they were ‘’tied up’’ in Holland, she illegally used client money to pay Milner £130,000 for his living expenses.

The thefts emerged after Milner’ investment schemes in pubs, farms and classic cars were all found to be fraudulent. Police also discovered he was the brains behind a petrol bomb attack on a petting farm he had offered to buy for £1.6m when he realised his scams had been found out.

The thefts led to the collapse of Egarr’s law firm and she was struck off last year. Her home was re-possessed and she now lives in sheltered accommodation on £73 a week in benefits.

Her former clients were only paid back 65p in the pound.

At Preston Crown Court earlier this week, Egarr was jailed after being found guilty of theft. She denied wrongdoing.

Milner was jailed for 17 years and nine months after he was convicted of 16 fraud offences, conspiracy to commit arson, running a company as an undischarged bankrupt and perverting justice. He was also disqualified from running a company for 12 years.

Sentencing Judge Heather Lloyd told Egarr: “You were a solicitor for many years and when Mr Milner came into your offices as a prospective client, you were taken in by him. I do find it hard to understand how you fell for his con.

“I accept that he was a persuasive man, but he never bullied you. I accept that when you started giving him the firm’s cash, you expected it to come back. But you didn’t just risk your firm’s money, you risked clients’ money too.”

A finance officer at the firm who authorised payments to Milner became concerned over the ‘’increasing hold’’ Milner had over Egarr, as she was losing other clients due to her obsession with him.

But she insisted she had done her due diligence. Payments were made to Milner even when cash flow became tight. The finance officer later quit the firm.

Investigators from the SRA eventually contacted the ERSOU itself to find officers had never heard of Milner.

Egarr was arrested in 2016 and said she agreed to lend Milner money because he was “desperate” and needed to ‘’feed his children’’ and said she accepted his explanation of his funds being ‘’tied up’’ in Holland.

In mitigation, Egarr’s lawyer Wayne Jackson described Milner as a “puppet master”, adding: “He was very persuasive and, through his various lies, he was able to persuade many people to do his bidding.

“While you might expect a solicitor to notice the warnings, she was taken in by him… In her defence, she did believe that she would get the money back.”