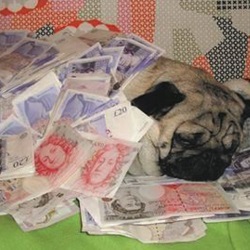 Sediqi showed off the money he had fraudulently accrued

A man has been jailed for orchestrating fraudulent motor insurance claims and cloning a claims management company (CMC) to pass them to a firm of solicitors in return for referral fees.

His partner at the time, Belma Draganovic, 32, was sentenced to 11 months imprisonment, suspended for 18 months, while a further co-conspirator, Mason Smith, 24, a former boxer and reality TV show participant, received a three-month tagged curfew order.

Sediqi has previously served time for fraudulent claims. This time, having cloned the CMC, Sediqi struck a deal to refer claims to a personal injury law firm at £500 for motor claims and £700 for all other claims.

Sediqi was referred to IFED for investigation in 2016 after the real CMC contacted the law firm looking to work collaboratively.

“The director was shocked to learn that the solicitors allegedly had a working relationship established already with his company,” the IFED recounted.

One of the three would then pose as the policyholder over the phone, claiming they had hit another vehicle. The third party would also be another member of the trio. To substantiate the claims, the group pulled photos of damaged vehicles from the internet and submitted them to the insurer.

The police said Sediqi and Draganovic used the money to fund a lavish lifestyle, buying a penthouse apartment in Gran Canaria and a number of “ostentatious” vehicles, including a bright pink Mazda RX7 that was seized by police and auctioned to compensate victims of Sediqi’s previous frauds.

Detective Constable Haywood, from the IFED, said: “Sediqi was investigated by IFED in 2013 and received jail time for contriving road traffic collisions. [He] clearly had not learned his lesson, and has yet again attempted to gain financially from a number of fraudulent activities.

“With accomplices in tow, Sediqi managed to fraudulently accrue nearly £245,000, targeting solicitors and insurance companies, and stealing the identities of companies and members of the public. The trio of criminals became tangled in a web of lies, which ultimately led to their downfall and the truth being exposed.”

Carl Mather, special investigations unit manager at Aviva, said the case underlined the need for the incoming whiplash reforms “to tackle the disproportionate compensation attached to whiplash claims, which continues to attract fraudsters, and which pushes up premiums for all genuine customers”.

Proceedings will now commence under the Proceeds of Crime Act to recover the funds which were illegally obtained and Sediqi is also being considered for a serious crime prevention order, which, if granted, will make him subject to restrictions to prevent him from committing further crimes.

Breach of such an order is a criminal offence punishable by up to five years imprisonment and an unlimited fine.