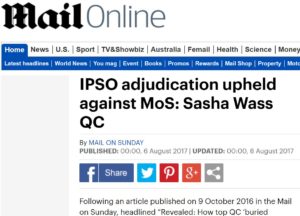 The Mail on Sunday (MoS) has been forced to publish a ruling highlighting its regulator’s serious concerns about the way it reported the conduct of a QC in a money laundering case.

Sasha Wass QC of 6KBW complained to the Independent Press Standards Organisation (IPSO) that the MoS breached clause 1 (accuracy) of the editors’ code of practice in an article headlined “Revealed: How top QC ‘buried evidence of Met bribes to put innocent man in jail’”, published on 9 October 2016.

The article arose out of confiscation proceedings relating to Bhadresh Gohil, a lawyer convicted for money laundering offences, following a trial at which Ms Wass was leading counsel for the prosecution.

Among other things, the article reported allegations made by a barrister for Mr Gohil in court that Ms Wass had “lied to judges in order to hide damning evidence of police corruption” at Mr Gohil’s appeal against conviction.

It said that Mr Gohil “continues to protest his innocence” and that he had “pointed out” that he had been “cleared of wrongdoing after a probe by the Solicitors Regulation Authority (SRA)”.

It described the barrister as “facing professional ruin” as a result of the case.

Ms Wass complained that the article was not a fair and accurate report of court proceedings and made a number of false and damaging allegations against her, arguing that it had also failed to allow her a presumption of innocence, while allowing a man who had pleaded guilty to serious fraud to assert his innocence.

She said the damage had been compounded by the newspaper’s failure to report accurately and fully her denial of the allegations.

Amongst the inaccuracies was that the SRA had actually closed the file pending the outcome of the trial, and not cleared Mr Gohli.

Ms Wass said this assertion was significantly misleading, as it gave credibility to his claims of innocence and supported the idea that she was responsible for a miscarriage of justice.

After initial efforts to resolve the complaint directly, Ms Wass contacted IPSO, after which the newspaper offered to make various changes to the online article with an accompanying footnote. It subsequently published similar wording in the ‘Corrections and clarifications’ column in print, and soon after that amended the wording to include an apology.

The final version said: “We would like to make clear that Sasha Wass QC did not admit seeing a dossier about police corruption in April 2014 before a defendant was charged with attempting to pervert the course of justice. We apologise for this error. Ms Wass says she was assured, at that time, that there was nothing adverse to report.

“Also, the defendant Bhadresh Gohil was not cleared of wrongdoing by the Solicitors Regulation Authority.”

It said: “This represented a serious failure to take care over the accuracy of the article.”

The committee was also concerned that the article had given the misleading impression that the complainant had taken key decisions in the case, which had, in fact, been taken by others.

It continued: “The committee considered that these inaccuracies, together, had given the significantly misleading impression that the complainant had had greater influence over the conduct of the case than was the position, and that she had potentially abused this authority.

“The impression given supported the damaging allegation that she had ‘buried evidence… to put [an] innocent man in jail’. This represented a further failure to take care over the accuracy of the article in breach of clause 1(i). A correction was required.”

The misreporting of the SRA’s position, meanwhile, had given “the significantly misleading impression that Mr Gohil’s claims of innocence were supported by the SRA’s findings. Moreover, it had given further unjustified credibility to the allegations of misconduct made against the complainant in court”. The committee said the MoS’s failure to check this assertion before publication represented a further breach of clause 1(i) and required correction.

While four further complaints were rejected, the committee also found that the correction that was published failed “to correct significantly inaccurate information promptly”.

It concluded: “The newspaper had published significantly inaccurate information and it had failed to comply with the obligations of clause 1(ii) by promptly offering to publish a correction. As such, the committee required the publication of an adjudication.”

This was done yesterday, with a 700-word adjudication published in print and online.