Investors "eager to back law firms" as regulators boost appeal 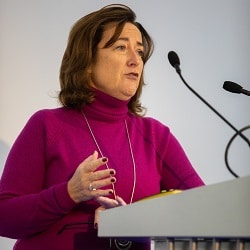 Foulston: We unashamedly go after the high margin work

Investors are poised to buy into the legal services sector to capitalise on recent regulatory changes, with corporatised law firms best placed to benefit, a leading expert in external investment in the profession said last week.

John Llewellyn-Lloyd also forecast an unprecedented level of consolidation that would result in half of mid-sized law firms disappearing through mergers and acquisitions in the next two years.

Meanwhile, consumer-focused investors would at last “Uberise” the legal market as years of regulatory uphheaval finally bedded down, he said.

The Legal Futures Innovation Conference also heard from leaders of one of the UK’s six listed law firms, who agreed corporate models increasingly appealed to younger lawyers unwilling to buy into traditional partnerships.

Mr Llewellyn-Lloyd, head of professional services at corporate finance adviser Arden Partners, predicted “massive changes to the benefit of the corporatised model” as a result of the Solicitors Regulation Authority’s (SRA) new regulations, which now allow practising solicitors to deliver non-reserved legal services from bodies it does not regulate.

Arden counts listed law firm Ince Group among its clients. Last week Ince said it was looking at how it could take advantage of the rules.

He said: “The SRA rule changes and the ability now to restructure businesses to ensure that you only have relatively small amounts of your business actually regulated [means] corporates are in a much better position… than any of the [traditional] partnerships.”

Mr Llewellyn Lloyd forecast that half of the top-200 law firms would “probably disappear over the next couple of years” through mergers, as consolidation accelerated. This would lead to a considerable “upscaling” of the average size of middle-market firm.

He also predicted that 2020 or 2021 would be the “consumer debut year for public markets”. After “four or five years of constant regulatory change, particularly in the personal injury markets”, which had deterred investors, these were starting to bed down.

Mr Llewellyn-Lloyd said they would start to drive a lot more public and private investments and some consumer firms coming to the market, due to greater investor appetite.

He described an “Uberisation” of the legal market, driven by the fact the SRA wanted to see “wholesale change in the industry” with solicitors themselves regulated but the organisations that employed them regulated much less.

He highlighted huge investment in the legal tech sector, predicting: “That is all going to be deployed in legal businesses as competition from [artificial intelligence] and all sorts of other things. There’s an enormous amount of equity coming into those disruptor models that are then going to be applied towards the sector.”

The session also heard from Nicola Foulston, chief executive of City firm Rosenblatt. Although the listed firm was the smallest of the six to float so far, Ms Foulston said it was easily the most profitable due to the firm’s single-minded pursuit of high-margin work, with every fee-earner bringing in £411,000 on average.

“We are unashamedly not full-service. We unashamedly go after the high margin work. It is a hugely competitive industry…

“We only go after the work we can make a lot of money out of and that is why we are predominantly a contentious practice and why our average bill is £17,000 when DWF’s… is £4,000.”

She said that for every £1 the firm billed, it made 37 pence profit. The next most profitable listed firm made 19% profit.

Good profit was at the heart of the firm’s strong dividend policy, which involved “getting profits back to our shareholders which include all of our staff”.

Ms Foulston said it was hard to interest younger lawyers in a traditional equity partnership model, and that this was a major attraction of listing.

There was consensus among participants that in the future multi-disciplinary businesses would be in demand by clients. Also, it was harder and more costly to win clients in the first place than it was to sell existing clients extended professional services.

Ms Foulston said she believed it was a “misnomer” to believe that the Big Four accountancy firms could take “all our legal work” because as auditors they had conflicts of interest that prevented them from offering to do certain legal work.

Mr Llewellyn Lloyd said the Big Four actually presented an “opportunity” for law firms because they would be “big buyers” of law firms: “For some partnerships that is an opportunity to sell themselves,” he said.