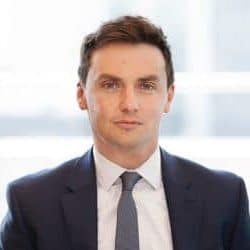 Bacon: Contract will be basis of other products

The contract – claimed to be the first of its kind – receives weather data and calculates potential claims obligations for the insurer.

The firm said it would form the model for other so-called ‘connected’ products – meaning a digital trigger is linked to an external data source – for clients covering different types of insurance and reinsurance agreements.

The firm said the contract was compliant with specifications laid down by the Accord Project, an attempt to establish global legal standards for distributed ledger-backed transactions.

But it also stressed: “It can be deployed on other systems and platforms.”

It is one a new breed of ‘parametric’ contracts increasingly popular in the insurance industry, which save on the cost of loss adjusters and pay out according to an index of parameters, such as the occurrence of natural disasters.

Partner and Clyde Code co-founder Lee Bacon said the contract had key advantages: “By using real-world data and streamlining processes it offers significant cost and efficiency gains for the industry.”

The connected parametric contract just launched “consists of a data model, a logic code and a supporting natural language contract”, the firm explained.

It “automates the performance of the policy by receiving weather data, calculating potential claims obligations, and producing an exportable report of insurance premiums or losses”.

Meanwhile, a proptech start-up whose real estate innovation was to use satellite imagery combined with legal and property data to create a transactional risk profile and is already in use by large law firms, has raised £1.2m in a funding round.

In a statement, it said: “With this round of funding [we are] working closely with early adopters on its product roadmap to make the property lawyer’s job more efficient and advisory in nature by moving the point of automation beyond the provision of raw property information contained in searches, towards extracting and highlighting potential issues that may be lurking in the data.”

In 2017 the start-up was among the cohort selected to make up the first participants in Mishcon’s MDR Lab incubator.

More recently, the company has refined its product so the satellite data is just one component among that from Ordnance Survey, HM Land Registry and local authorities.

Orbital Witness has also supplied a product aimed at in-house teams to high street retailer Marks & Spencer, among others.

The company, which ran its first pilot last year, claimed it was “already helping property lawyers to drastically reduce the time it takes to build a detailed understanding of the properties or sites they are working on, profile relevant transactional risks, and get on with the job of providing useful, clear advice to their clients”.

Co-founder and chief executive Ed Boulle said: “Real estate is the most valuable asset class there is. Everyone involved in a real estate deal naturally wants visibility of any red flag legal issues with the property ahead of time.

“The trouble is, if you’re weighing up multiple properties or sites, it just isn’t possible or practical for your lawyer to go into the detail of each one without incurring significant expense and delay.”

Will Pearce, his co-founder and chief operating officer, added: “We believe the answer lies in automated legal risk profiles – like a credit check, but for land and property.

“[This allows] lawyers and their clients to instantly access an up-front, low cost, view on a property before progressing a deal.”