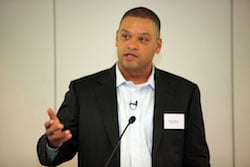 A fast-growing developer of contract review artificial intelligence (AI) software has raised $50m in investment from venture capitalists in order to fuel future growth – the first time it has sought cash from the market.

He claimed that while Kira was growing fast, its competition was used by only “a handful” of top global firms.

Since early 2016, the company had grown from 25 employees to around 115 today, he said. “We think we have a lot more opportunity to grow further”.

Separately, Rocket Lawyer said its venture into the world of tamper-proof blockchain contracts – to be known as Rocket Wallet, which will be beta tested in 2018 and launched commercially in 2019 – was driven by a desire “to limit the sharing of consumers’ personally identifiable information and enhance consumer privacy and security”.

Future developments arising from the deal would include bringing “smart contracts, automated dispute resolution and identity management applications to the legal services market”, it added.

Rocket Lawyer founder and chief executive, Charley Moore, said: “Together, we will work to increase access to justice by closing the gap between contract execution and trusted, secure performance of agreed-upon obligations.”

Aaron Wright, OpenLaw’s co-founder said the collaboration would “accelerate our shared vision of mainstream adoption of the extraordinary benefits of blockchain-enabled legal services”.