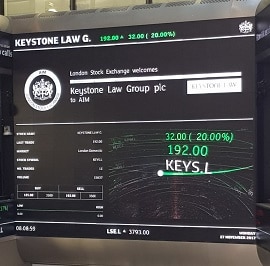 Several listed legal businesses in the UK bucked the downward trend of the stock market in 2018, with ‘challenger’ firm Keystone Law the standout performer.

Legal Futures has been tracking the progress of listed legal businesses, with 2015 proving a good year for them, when they beat the market, but 2016 generally far less so.

Gordon Dadds began 2018 on 142.5p, and spent most of the last quarter of the year with its shares suspended during the negotiations with Ince & Co, meaning it closed on 172.5p, an increase on the year of 21%.

However, the market liked the announcement of the deal and the shares jumped to 190p when they began trading again last week.

However, City firm Rosenblatt, which listed on 8 May 2018 at 105p, reached a high of 135p a few weeks later, but its share price has declined steadily since then – for no obvious reason – to close the year on 74p, a fall of nearly 30% on its initial price.

Redde, the accident management firm that owns two alternative business structures – NewLaw and Principia Law – has been steady in recent years, ending 2017 on 175p, was just 5p or 3% lower a year later, although it had been as high as 196p.

Away from law firms, third-party funder Burford Capital has been a stand-out performer for investors for years.

NAHL – the legal marketing company that owns National Accident Helpline – had a disappointing 2018, which perhaps reflects the uncertainty surrounding the personal injury market despite its efforts both to diversify and protect its personal injury income streams by setting up alternative business structures.

Two other litigation funders listed on AIM at the end of last year – LCM, which issued at 52p and closed December on 70p, and Manolete Partners, which went from 175p to 194p in its first two weeks as a public company.