Innovation in law – it takes “sweat, risk and stubbornness” 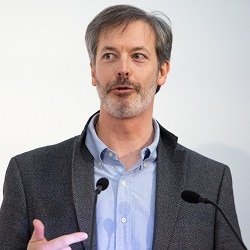 Gallen: All law is to me is behaviour management

The founder of a pioneering alternative business structure has described innovation in the legal sector as “sweat, risk and stubbornness”.

Gary Gallen, chief executive of Yorkshire firm rradar, said his rapidly expanding firm could no longer grow quickly enough from recruitment and was “looking into a couple of acquisitions”.

Speaking at last week’s Legal Futures conference in London, Mr Gallen said: “You don’t have to be the smartest person in the legal sector, but you’ve got to work bloody hard. You’ve got to accept that you need to take risks, and you’ve got to be really dogged and stubborn and see things through.

“It’s not much cleverer than that in my view – see things through and focus on what the client truly wants.

“All law is to me is behaviour management. It’s pretty much written to correct bad behaviour – stopping you doing things you shouldn’t do.

Mr Gallen said there had been “a constant wave of recruitment” as rradar grew from 50 to 100 to 150 people, but the firm needed “greater volumes” of staff.

“It’s not that we can’t find people, it’s the pace of recruitment. We’re looking into a couple of acquisitions at the moment to help with that faster growth.”

Rradar began as an employment, taxation, health and safety and environmental law service, based in Hull, becoming an ABS in 2014.

Mr Gallen described it as “four businesses under one structure” with its own technology business and its own coders and developers, creating in-house technology products.

Mr Gallen said rradar also had a multimedia and creative team, so people could learn through video, podcasts and webinars, rather than in writing.

He said the firm has a training and education consultancy, to “educate and empower” clients to do things for themselves.

“We give them the technology as well as the knowledge. We’re not frightened of doing that and sharing information, because it’s on Wikipedia or Google. People already risk getting the information from uncredited sources. It’s out there, whether we like it or not as lawyers.

“What I want is for the client to think that they have got something of real resonance, real value in their business. So that actually we can have a conversation with clients at a higher level and we’re offering them a better service.

“You’ve got to give before you can get.”

Mr Gallen said that when ABSs came in and he was speaking to banks and private equity houses about his plans to set up the business, “nobody would believe in the model” and that “you could take four discipline areas and get them to work together”

After 29 rejections, Mr Gallen said he could not face getting “a round 30” so “one of the hardest presentations” he had to make was to wife, telling her “we’re going to have to remortgage and put all our life savings into this” and take an unsecured loan.

Mr Gallen said hiring staff, taking on premises and buying equipment was expensive, so “you‘ve got to be stubborn and see it through”.

He said the firm had been profitable as a business since the third month of trading, and had twice borrowed seven-figure sums from private equity houses.

The firm has since been able to buy back the equity, so it is now entirely owned by its directors.

“I gave them shares to reward them for their sweat and their creativity,” Mr Gallen said. “It can be done. We’re growing, we’re recruiting and we’re developing the business.