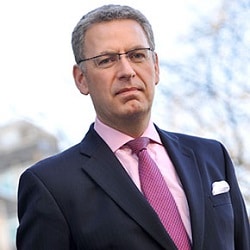 Atkins: I want a happier Bar

The Bar could be “sleep walking into a nightmare scenario” where new rules mean it has no involvement with its regulator, the incoming chairman of the Bar Council has warned.

Richard Atkins QC also suggested that the Legal Services Board (LSB) did not have the evidence to back up its assertion that its proposed internal governance reforms were needed or would lead to costs savings.

Last month, the LSB published a final consultation on revised internal governance rules which would clearly limit the influence the Bar Council could have on the Bar Standards Board (BSB) – and other bodies like the Law Society could have on their regulatory arms.

In his inaugural speech to the Bar Council last night, Mr Atkins – who takes over from Andrew Walker QC on 1 January 2019 – said the proposals risked the BSB becoming “more and more remote from the Bar Council”.

He explained: “There is the possibility, for example, that the Bar Council will have absolutely no involvement in the future appointment of members of the BSB’s board.

“There is also the possibility that, unless the BSB decides to consult the Bar Council on its budget plans, the Bar Council will have no input into this process either. And this of course decides the level of the practising certificate fee.

“These, and other proposals would in my opinion be unhelpful both to regulator and regulated if brought into being.”

Mr Atkins said that, whilst the BSB’s mission was to protect the public and consumer interest, “we do rely on them having an understanding of the profession and the challenges it faces”.

The LSB’s new rules risked undermining this, he argued, and could lead to disputes “that simply do not exist at the moment”, as well as an increase in the costs to the Bar.

He questioned whether there was evidence that the proposals were needed, or for the implication in the consultation that the public did not have confidence in legal services provided by the Bar.

“In my opinion, there is a need for those who constantly peddle the dogma of regulatory independence to understand what the Bar is and does and how we pride ourselves on our professionalism.

“The Bar has never been against the high-quality regulation of legal services, but we are unshakeably firm in our view that over-regulation is not a good thing.

“We must fight hard to make the case that we do not need further regulation, further red tape or a super regulator.”

This was why the Bar Council was asking the LSB to prove its assertion that the proposals would lead to cost savings, he added: “We have seen no evidence for this.”

He also urged barrister to respond to the consultation. “It will be no use complaining if you do not respond and you find that we have sleep walked into a nightmare scenario.”

Mr Atkins is leader of the Midland Circuit and practises from St Philips chambers in Birmingham and 4KBW in London. He specialises in regulatory and serious criminal matters.

In a wide-ranging speech on the issues facing the Bar, he said one of his main aims for 2019 was “to raise the level of understanding across the Bar as to what exactly the Bar Council is and does”.

He continued: “The Bar Council is not a bogey man that simply seeks to charge members of the Bar more and more to allow them to practise. It is not some foreign body that is there to make life difficult for practising barristers.

“We are here to support the Bar and we will continue to do precisely that during my tenure.”

The other big issues for the Bar Council to grapple with over the coming year were the state of the justice system, Brexit, court reform, equality and diversity, and practising as a barrister.

Mr Atkins concluded that his overarching aim was “to see a happier Bar”.

He said: “I appreciate that some may see that statement as being naïve and some might claim that it is offensive given the problems that the Bar and, in particular, the publicly funded Bar face.

“But I am not naïve, and I am not seeking to cause offence. This year will be 30 years since I was called to the Bar. I have not lived in an ivory tower and I am not blind to the numerous problems that the Bar has faced recently and will continue to face.

“But, if we are successful in tackling the matters I have outlined, this will in my opinion go some way to achieving a happier Bar.”