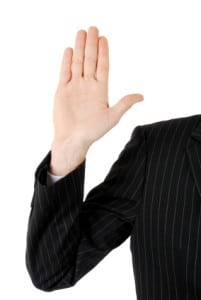 Pledge: would a lawyer’s oath remind lawyers of their responsibilities?

The Institute of Legal Executives (ILEX) is considering whether to become the first legal body to require newly qualified members to take a ‘lawyer’s oath’ equivalent to the Hippocratic Oath doctors take on qualification.

The ILEX council has considered an introductory paper on the concept of an oath, and there are plans to canvass the views of the membership.

‘An oath may be a reminder that the business of being a lawyer is a responsible, serious and not always an easy one,’ she said. ‘It reminds the newly admitted lawyer of his/her privileged position as a lawyer and of the lawyer’s commitment to, for example, the rule of law.

‘In the case of legal executives, such an oath could serve to remind the newly admitted lawyer, and even the long-admitted lawyer, of the principles in our Code of Conduct to which we must adhere in our professional lives.

‘It is my belief that on becoming a legal executive, you become a lawyer, not merely a conveyancer or a personal injury specialist or a legal aid practitioner. You become someone who must uphold the rule of law and use the law in a manner consistent with our professional obligations and for the benefit of justice in the widest sense of the word.’

Speaking at the National Pro Bono Conference last November, Law Society chief executive Des Hudson told delegates that he was ‘attracted by the idea of an oath’, taking the form of a declaratory statement of principles at the point of admission. However, Bar Council chief executive David Hobart was concerned that it could be too abstract.