IBM lays out massive potential for Watson in the law 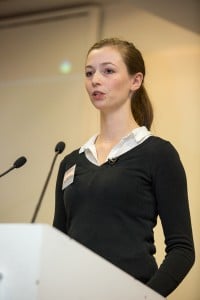 Cognitive computing could be used to suggest which arguments in court might play well or badly with a particular judge at a given time of day, according to a senior member of IBM’s Watson development team, although she outlined a number of more benign uses for the technology.

Speaking at the Legal Futures Annual Innovation Conference in London this week, Kyla Moran, senior consultant, Watson Industry Leadership, said Watson could in future be listening to conversations with clients and giving advice, dealing with paperwork, and so on, potentially providing new business insights gleaned from the vast amounts of data generated by law firms.

She stressed that Watson applications used in law firms would be specific to that client and that IBM had no claim on the results, which would remain confidential.

One possible use lawyers could put the technology to was to do a ‘psychographic’ profile (the study of values, opinions, attitudes, and so forth) of a judge to see how they might react to different types of argument in court, and even what time of day would be ideal to present them. But she admitted this direction was “slightly creepy”.

Businesses purchasing Watson technology for a specific purpose could be up and running within six months, Ms Moran estimated. But the first generic ‘Watson for legal’ type application could take a year or more to develop. She predicted that when a company finally set out to create such a “ground-breaking product”, there would be a “cascade motion” of further Watson-based products.

Currently IBM was aiming cognitive computing at “smaller to mid-size law firms” as well as “big law”, she said. Watson-based apps could be developed “immediately” by any interested legal services provider, via IBM’s Bluemix platform.

Each customer buying the technology from IBM would receive a “brand new, baby” version of Watson, which would need to be trained from scratch in the particular needs of that organisation. It would be completely distinct from other instances of Watson and could not share data via the internet or cloud.

The hardware manifestation of Watson was “about a third the size of a pizza box”, Ms Moran said. It would reside on IBM’s servers and communicate with the law firm via the cloud. But the computing giant has no claim whatever on any intellectual property resulting from a firm’s use of Watson, she emphasised.

She explained that the way Watson works is not to attempt to give ‘right’ or ‘wrong’ answers to questions put to it, but to rank answers on a scale of confidence, providing suggestions based on probability. Content answers are recommendations supplied in “infinite shades of grey”, she said.

Watson was not artificial intelligence, but “augmented intelligence” which needed “a human brain to interact with the system in order to make it work… both in programming it and using it”. It would help lawyers to ensure they did not miss information crucial to their work, such as legislative changes.

It was a computing system that “educates itself going forward”, as its trainers approve or disapprove the answer it gives. Also, Watson provides the reasoning behind its answers if questioned “why did you do that?”, she said: “It’s not a mysterious black box where the information comes out and you have to trust it; it is a partner system”.

The amounts of data produced every day were “obscene”, said Ms Moran, and expand exponentially – “the only self-replicating resource we have in the world today”. As well as improving back-office efficiency, crunching the data could be used to add value when advising clients who ask “what more can you tell me?”.

Lawyers needed to explore where there might be “cognitive opportunities” in their everyday work, she said. Watson had great “raw potential” and there were “no limits on the ways this technology can be implemented”.

Challenges facing the developers of Watson were materials in different languages and formats, she said. Work was ongoing to capture data in digitised books and articles. Training the system to watch video clips and extract meaning and ideas from the content was a current challenge.

She drew a comparison with doctors in the medical field, who she said were unable to read a fraction of the huge number of articles produced in medicine each year. It was an “information overload” that was “impossible to keep up with, even in a specialised branch”, she said.

Watson was already in use in attempting to improve cancer care, to speed up diagnosis and reduce the amount of time patients are in pain. In education, cognitive computing was helping to develop interactive toys to help children learn in a personalised way and fill gaps in their knowledge. It was also in use in the field of security and defence intelligence, Ms Moran said, but could not elaborate.