I was wrong to sell my firm to Quindell, says former legal division boss 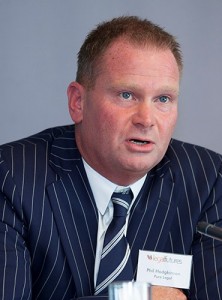 The former chief executive of Quindell Legal Services (QLS) has admitted that he was wrong to sell a business he had built up over 13 years to the troubled plc two years ago.

Phil Hodgkinson was the managing director of Compass Costs Consulting when it was sold to Quindell in April 2013 for £14m.

Speaking at PI Futures last week, he explained that he had been approached by a number of firms interested in acquiring Compass and “chose the wrong one”.

He described Quindell, now the subject of a Serious Fraud Office investigation, as “very acquisitive at the time” and said his decision had been influenced mainly by timing. “I could see where the market was going with Jackson and fixed fees.”

“These were very interesting times,” Mr Hodgkinson said. However he did not agree with the way Quindell was running the company and by July 2014 began “extracting myself from the business”.

Mr Hodgkinson’s departure was sealed with a settlement agreement in December 2014.

“One thing I learnt… and one thing that I think all of us in this industry need to learn and remember, which doesn’t get spoken about a lot, are the client and the customer.

“There is a massive focus in this market, and more so in the last 10 years, on commerciality and how much money people can make. Providers of work are making far too much money in my opinion.

“Solicitors are making far less money. We’re deskilling the marketplace. We’re employing fewer solicitors and qualified people, which ultimately means that the service we’re providing to claimants is suffering. Everyone is looking at the bottom line.

“For this market to survive and prosper again, we need to concentrate on the client, the claimant, the customer and providing a quality service. If you do that, profitability will follow.

“Fixed fees are coming for everything. They will be implemented in October 2016 for clinical negligence. You can sit there and complain about it for as long as you like, the reality is that it’s coming.”

Mr Hodgkinson said claimant solicitors needed to get together, and come up with an alternative that was more “workable” for lawyers than fixed fees.

He argued that insurers want to rid the market of “questionable providers of work” and commissions, and the way they were doing it was by “penalising solicitors” because claimant lawyers would not get together collectively and do something about it themselves.

He added: “You can have a room with 100 claimant lawyers in it, who will all agree that they will not pay £300 for an RTA claim, but you can guarantee that five minutes later 20 of them will be on their mobile phones to the referrers offering double.

“Whilst we are operating in a market like that, you’re going to have fixed fees for everything and it’s not going to work.”

Mr Hodgkinson said Pure Legal would aim to operate in a new fashion. “Law has become the new double glazing and… it’s all about what’s in it for us, not about providing a service. Until the claimant side of this industry realises that that’s where the focus should be, and come together and collaborate, offering alternatives to what the MoJ and the ABI are trying to do, it’s going to happen and we’re just going to complain about it.”