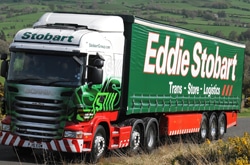 Stobart trucks: being driven by a former solicitor?

The strength of the Eddie Stobart brand means that hundreds of people a week are already seeking advice from its new barrister service, the company’s group legal director has told this website.

The launch a little over two months ago of Stobart Barristers – promoting a direct access model to consumers – was greeted with astonishment in many quarters of the legal profession, but Trevor Howarth said the Bar has embraced the concept.

Part of Stobart Barristers’ offer currently is that callers can speak to Mr Howarth himself; he said he deals with all cases which pass initial screening and need allocation to a barrister. In the week before speaking to Legal Futures, he had personally dealt with calls from 362 clients and up to 11 o’clock at night.

Mr Howarth acknowledged that this is not a sustainable model in the longer term, especially as he expects the service to be receiving 1,500 calls a week “in the not too distant future”. Aside from a digital marketing strategy, there has been no other advertising of the service.

The appetite from the Bar “has been enormous”, he said, claiming to have been contacted by 80% of all chambers about members joining the existing panel of 1,200 barristers. This has also helped the model evolve, as it is proving cost-effective in some cases for junior barristers to handle preparatory work that might otherwise be done by Stobart’s 20-strong paralegal team.

“By and large now a client will have a free conversation with a barrister [about their case] and then be presented with a fixed fee,” Mr Howarth continued. Though some barristers were initially concerned about the calls effectively being pro bono work, they are converting into instructions, he said, and the barristers have also been able to tell the client exactly what they need to progress the case.

Speaking directly to the barrister gives the client “comfort in the level of expertise” of their potential adviser, which is helping conversion, he added.

Mr Howarth said Stobart Barristers has buying power because of the volume of cases it is putting chambers’ way. He said in one day recently one set received four divorces, two employment cases and six corporate matters, meaning he was able to negotiate a fee rate that others cannot.

There have been more divorce enquiries than expected, Mr Howarth said, while other popular areas are crime, motoring offences, employment and corporate/commercial advice for SMEs.

“The speed of the success is down to the size and quality of the brand,” he argued, pointing to the Eddie Stobart documentary series on Five, which highlights the company’s drive “to take the waste out. We’re now extending that to the legal profession”.

Mr Howarth said the favourite comment he has seen about the service since it launched was the quip that the next time you see an Eddie Stobart lorry driver not smiling, it’s because they used to be a solicitor.