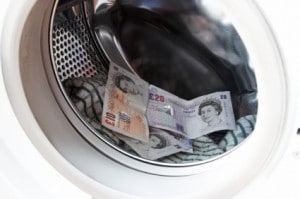 The Treasury reported a “significant increase” in enforcement activity

There has been a massive increase in the number of lawyers disciplined by their professional bodies for breaking the rules on money laundering, a Treasury report has found.

In its anti-money laundering (AML) and terrorist financing report for the financial year 2013-14, the Treasury said the number of lawyers fined across the UK had increased from four to 61. A total of 65 were expelled from their professional bodies, compared to 11 the year before.

There were equally sharp rises in the numbers suspended, from five to 26, and reprimanded, from two to eight. The only figure to remain almost the same was for lawyers made subject to an undertaking or condition, which rose from 23 to 29.

The Treasury also reported some big increases in AML enforcement against accountants during the period, with the number fined increasing from 18 to 50 and subject to an undertaking or condition from three to 46.

The report – which looked at the work done by a wide variety of supervisory bodies – said there had been a “significant increase in enforcement activity” against professionals across the board in the year 2013-14.

A spokesman said the increased figures for lawyers could be attributed to a “significant increase in the use of enforcement tools” by the Law Society of England and Wales (in reality, the Solicitors Regulation Authority). The report noted that for both the accountancy and legal sectors there was “increased use of every enforcement tool”.

Meanwhile, responding to a call for evidence on suspicious activity reports (SARs) issued by the Home Office, the Law Society has criticised “lack of knowledge and understanding” on the part of National Crime Agency (NCA) staff who receive the reports.

Some solicitors said staff did not understand legal sector transactions and seemed “focused on the idea that solicitors are just transferring a sum of money like the banks”.

The society described the online SAR reporting tool as “slow and cumbersome” and “designed for use by financial institutions other than law firms”.

Chancery Lane called for an element of intent to be reintroduced into money-laundering offences, so that professionals must suspect intent to launder money rather than the fact it may be taking place.