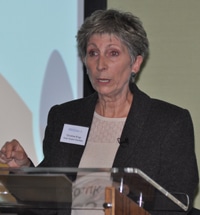 Kings: opening up of the chambers’ approach to innovation

The launch of Riverview Law last year generated “shock, confusion and resentment” at a rival chambers whose membership supplied four of the new venture’s initial 12 QCs, but in the end it helped the set adapt to the new legal market, according to its commercial director.

Giving a rare insight into the market impact of the launch of Riverview Law – the fixed-price commercial law business – at Legal Futures’ New business models for the Bar event in London last week, Christine Kings, commercial director of Outer Temple Chambers, described how the chambers responded to the challenge when four of its senior members took up the dual practice option with Riverview Chambers.

“Unsurprisingly, there were some people who wanted to outlaw this kind of association,” she said. But actually what resulted was an opening up of the chambers’ approach to innovation among its members.

“I actually think we handled it really well… The bottom line is we’ve accepted that this is a new market that we’re operating in and if barristers want to experiment or to take up these new opportunities, then we’ve recognised that we can’t stop them and actually, we may even want to encourage them.”

The chambers has designed websites for barristers who want to set up their own operations and invited its members “to bounce their ideas for new entities, new business projects, with us”, she explained. Ms Kings – who helped set up Doughty Street Chambers in 1990 and was its chief executive until 2007 – added that there were some “very exciting projects” underway among Outer Temple barristers.

The Riverview launch “caused us probably more problems than any other set”, she continued. Although “we had anticipated that this sort of thing could happen and we’d been discussing it in our strategy sessions”, when it happened “it was a bit of a shock and generated confusion, quite a lot of resentment, and also some excitement”.

She revealed that the chambers has been organising itself to respond to anticipated changes in legal services delivery since around 2007/8. For instance, its publicly funded criminal team was reoriented towards white collar fraud, regulatory work, health and safety, financial services and VAT work. While 10 years ago just under 30% of Outer Temple’s work was publicly funded, “as of last month it was down to 4.62%”.

The chambers has also sought to pursue distinctive initiatives to raise its profile. These have included attempting to expand its international work and setting up a US office. Ms Kings was candid about the venture’s success: “I’m not going to say it’s been brilliant; some things have worked really well and others haven’t and it is a work in progress.”

Also, to defuse discontent with disparities between percentage contributions paid by the highest and lowest earners in the chambers – and risk losing highly-paid members to other sets or law firms – it has adopted a restructured contributions model in which “the less you earn, the more you pay”, said Ms Kings. The first £100,000 of earnings attracts a 19% contribution and falls 2% for each further £100,000, meaning “a member earning over £1m can pay less than 10%”. Average contributions across the chambers are 14.5%.

Similarly, reconciling differing ambitions between those members who wished to pursue international work – with all the attendant costs of building such as practice – and the almost half of the chamber’s members with PI and clinical negligence practices, meant taking radical action, she said.

The chambers has divided into two departments – named ‘business’ and ‘health’ – which have their own marketing budgets and recruitment processes, and have “freedom to plan and implement their strategy for growth”.

Ms Kings admitted that while both departments currently believed they were “stronger under the Outer Temple umbrella than they would be separately”, this might not always be the case. “In 10 years’ time… there may be good reasons for one of them to merge with another set, to split or to do something completely different.”

If that happened, “we’ve already allowed for that – we’ve given them the infrastructure and the strategy”, she said.

She concluded: “What we’ve tried to do… is to find out how we can get mutually beneficial outcomes for barristers who want to do their own things and for chambers. I know there are some sets that are putting restrictions on barrister activities and they’re redrafting their constitutions to try and enforce these.

“We’ve taken the view that we need to make chambers so successful that they won’t want to go anywhere else and that’s what we’re doing. It’s optimistic, it’s challenging but we think it’s the only option.”