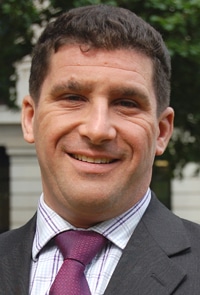 Yantin: whole country is up for grabs

Managing director Gary Yantin said the focus for the next 12 months is to grow its number of member firms.

The network was founded in July 2010 and has 10 small law firm members across 12 locations.

Mr Yantin has announced plans to double that number in the next year and will expand “region by region”, starting in London.

He said: “We want to grow both sides of the business this year without being hugely aggressive. We want to add a few more law firms and then concentrate on the consumers to show to our members that we can bring work in, add value and make savings.

“We could grow by 20 or 30 firms, but that wouldn’t be sensible. Clients have to see a better experience from high street firms and the market has seen that if you grow too fast, you end up not being there to service anyone.”

Mr Yantin said HighStreetLawyer has “gaps in its network” and will look to add at least five firms in London. He said “the whole country is up for grabs”.

He said: “We haven’t done it yet because haven’t needed to. At the moment we manage costs on a fixed-price basis. But in order to get more work to law firms we will need to give consumers a way to reduce the cost of legal services by doing the initial work themselves.”

The network claims to offer a lawyer for almost every typical consumer ‘high street’ sector, although it will not be going into personal injury any time soon given the financial pressure the sector is under. “We will keep an eye on it and jump in at the right opportunity,” Mr Yantin said.

As part of the growth announcements, the network will launch new fixed price products and a document assembly platform.

It is also promoting its own social networking site where member firms can discuss work, best practice and send each other referrals.

Rather than taking a percentage of turnover, HighStreetLawyer takes a franchise fee and charges for extra services.

Mr Yantin said in terms of competition, the key is where to hook consumers. He explained: “The mass market route of Lawyers2you or QualitySolicitors doesn’t sit comfortably with me. I am yet to be convinced that consumers of legal services can be found wandering around shopping centres or responding to TV adverts.”

Speaking at a HighStreetLawyer conference last week, he explained: “Whilst the current climate is challenging for small law firms, I strongly believe that firms providing great quality, fixed-price services that are really well tailored to the needs of clients have some great opportunities.

“Embracing technology for client interaction and service delivery and not just as a back-office tool will be a key driver for success for smaller law firms.”

Chris Marston, head of professional practices at Lloyds TSB Commercial Banking, who also spoke at the conference, said: “At a time when new entrants are coming into the legal services marketplace, it’s important for traditional law firms to take stock of the way they operate so they can remain viable and competitive in the new post-Legal Service Act environment.

“Membership groups can have a role to play in this, and it is clear that the attendees at the Highstreetlawyer.com conference are alive to the issues.”