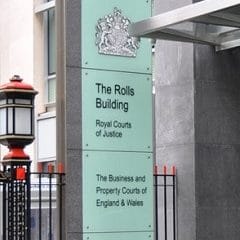 The High Court has struck out a claim for professional negligence, breach of contract and fiduciary duty made against a central London law firm which was based on “incomprehensible pleadings”.

Master Shuman said Amanda Clutterbuck was “no stranger to litigation” and had complained about Brook Martin & Co to the Solicitors Regulation Authority (SRA).

The master said: “Enough is enough and the prejudice to the defendants in allowing this claim to proceed overwhelmingly militates in favour of granting the defendants’ application.

“The prejudice to the defendants is not simply the invidious position of being served with incomprehensible pleadings for a claim which the claimant apparently regards as being worth multi-million pounds.

“I am also told that Alpha Insurance, who provided the primary layer of indemnity insurance for the defendants, have become insolvent. The defendants are having to fund the defence of these proceedings out of their own pockets.”

Master Shuman said that among the allegations made by Ms Clutterbuck against the law firm were allegations of fraud “without any particulars” and an “unintelligible assertion of ‘reckless carelessness’”.

He said that when questioned as to whether he was advancing a claim based on fraud, Richard Owen-Thomas, counsel for Ms Clutterbuck, said he had “not seen evidence to support this and could not ‘sit here and say fraud’”.

Master Shuman went on: “He submitted that, if the SRA corroborated what the claimant said, then she would be entitled to bring such a claim.

“That is not how fraud is to be pleaded. The claimant must have a proper basis for making an allegation of dishonesty against the defendants and she cannot simply see if something emerges perhaps in disclosure, during cross-examination or, in previous claims, after the trial.”

Ms Clutterbuck said her claim against Brook Martin & Co – which had been her and her partner’s property solicitors for many years – arose from “breach of contract, professional negligence and/or breach of fiduciary duty” on the part of the law firm regarding various property transactions.

Delivering judgment in Clutterbuck v Brook Martin & Co [2019] EWHC 1040 (Ch) – handed down in April but only just published – Master Shuman said Ms Clutterbuck’s claim was “another claim in a sequence of cases whose factual heart lies in the property dealings in Knightsbridge, Belgravia, Chelsea and Westminster, by four protagonists – the claimant, Ian Paton, Elliott Nichol (EN) and Sarah Al-Amoudi (SAA).

The master said Ms Clutterbuck and Mr Paton claimed they had transferred £2.28m to SAA or her agents for the purchase and refurbishment of central London properties.

In a judgment that was widely reported by the national media, Mrs Justice Asplin dismissed their claim in 2014. She found that Mr Paton was in a “romantic relationship” with SAA and that he did pay £2.28m and a further £800,000 to SAA, but this was simply repaying money she had loaned him.

Master Shuman said that, earlier this year he dismissed an application by Ms Clutterbuck for disclosure of certain SRA documents relating to her complaint.

On the claim against Brook Martin & Co, Master Shuman ruled that it should be struck out on the grounds that the particulars of claim, which ran to 58 pages and two appendices, were “impossible to understand and plead to”; for the same reason there had been failure to comply with CPR 16 and practice direction 16; and the claim was an abuse of process because it “seeks to impugn previous decisions and makes contentions which are inconsistent with the decisions made previously”.

Mills & Reeve acted for the solicitors and their professional indemnity insurers. An article on the case on the firm’s website said: “This decision is a very helpful example of how to deal with claims of this nature and fight back. Sometimes, it really is worth investing the time and money in a detailed and articulate strike-out application and following it through.

“At worst, it might simply provoke the claimant to provide a fresh but coherent claim. At best, the claim is defeated before the proceedings have gathered pace.

“It is notable that in this case, no CPR-compliant pleading was ever offered; this led to the master’s concern that nothing would change if she gave the claimant another chance. Enough was enough.”